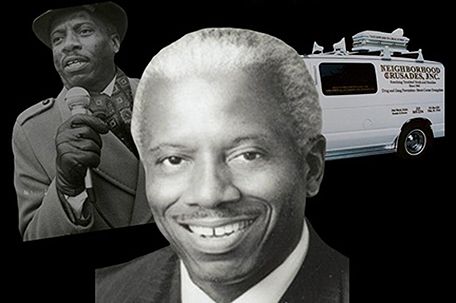 Archbishop Mary Floyd Palmer, Presiding Prelate of the Philadelphia Council of Clergy, Inc. (PCC), with deepest regrets informed the clergy of Philadelphia and the general public that her father, Rev. Dr. Melvin Floyd, made transition on Monday, April 20 at the age of 85 from natural causes.

“Words are inadequate for me to express the magnitude of the loss,” she said in a statement.

“My Daddy was not just a great husband, father, grandfather, great-grandfather, brother, family member and friend to many, but a true Crusader who tangibly did all he could to end any kind of violence that cost many lives.  His signature van with the coffin affixed on top was an “in-your-face-message” that life is precious and to stop doing wrong or there is a heavy consequence.”

“Many of you met him in the school assembly, on the street corner at his meetings or in the prison, and still remember the words he spoke that changed your life,” she continued.   “Because of this, he was known as one of Philadelphia’s legends and will always be remembered for being a wise, witty and generous man who truly cared about ALL people.  He IS my hero, and I am so proud to be his firstborn child who he blessed with his mantle. Well Done, Daddy!”

“I thank each of you for your kind expressions shared to me and my family during this time of sorrow,” she concluded.  “I pray God’s richest blessings upon each of you and simply say, “thank you”.”

A street preaching legend in his own right, Rev. Dr. Floyd was called to serve God in his early teens, although in his career choice, he served  with distinction as a Philadelphia Police Officer first.

After retiring from the police department, he started his own street evangelism ministry, known as the Neighborhoods Crusade Inc., which he operated for more than 40 years. While he preached and taught God’s word to thousands over the years, he was best known as the preacher who drove around in a van with a coffin on top, encouraging people to stop the violence and leave drugs alone.

An announcement regarding his life celebration will be forthcoming. In lieu of flowers, it is being asked that sympathetic expressions be sent to P.O. Box 44152, Phila. PA 19144 or via email to: [email protected]. Prayers for the entire Floyd family will be appreciated.