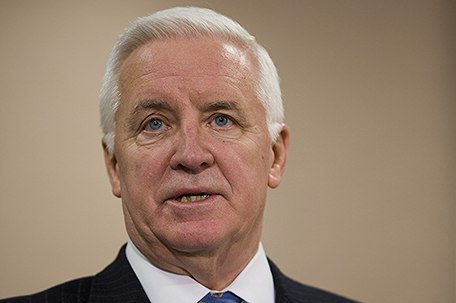 By Marc Levy and Peter Jackson

HARRISBURG, Pa. – Pennsylvania lawmakers sent Gov. Tom Corbett a $29.1 billion election-year spending plan shortly before Monday’s midnight deadline and after hours of intense partisan debate, but Corbett said he was not ready to sign it.

“I will continue to work with the legislature toward meaningful pension reform. I am withholding signing the budget passed by the General Assembly while I deliberate its impact on the people of Pennsylvania,” he said after the House sent him the budget bill.

The bill, which seeks to plug a massive deficit without increasing taxes, was passed by the Republican majorities in both houses over the objections of Democrats who said it favors the haves over the have-nots.

“This budget will reflect where we are,” said his committee counterpart in the Senate, Sen. Jake Corman, R-Centre.

Democrats contended that the bill relies too heavily on transfers, one-time revenues and gimmickry to balance the budget.

“This budget is reckless and it sets us on a dangerous precedent,” said Rep. Dan Frankel, D-Allegheny.

Leaders of the House and Senate Republican majorities couldn’t drum up enough support for the pension overhaul Corbett wanted in conjunction with the budget. The plan would reduce future state and school employees’ pensions to save more than $10 billion over 30 years.

Democrats were united in opposition, and some Republicans opposed it.

Instead, the Senate passed a bill Monday that would shift state lawmakers, judges, the governor and four other elected executive branch officials into a 401(k)-style system. It’s expected to save $690 million over 38 years.

Corbett is seeking re-election and faces a strong challenge from businessman Tom Wolf, who poured $10 million into his campaign to finance a folksy TV ad blitz that helped him win a four-way Democratic primary in May and maintain a wide lead over Corbett in independent polls.

The spending increase in the bill will largely go toward public schools, prisons, public pension obligations, health care for the poor and social safety-net programs.

Philadelphia Sen. Vincent Hughes, the ranking Democrat on the Appropriations Committee, called it a “flim-flam sham” budget that is built on shaky assumptions and the backs of the working poor.

Significant portions of the Republicans’ budget plan were just emerging late Monday night because a large companion bill, which outlines some of the budget plan’s biggest financial maneuvers, had just been unveiled.

The big task for Republicans was to address a massive and unexpected collapse in tax collections that tore a gaping $1.7 billion hole into the $29.4 billion budget plan Corbett proposed in February.

Democrats had proposed making up the shortfall by expanding Medicaid under the 2010 federal health care law, delaying planned tax cuts for businesses and increasing taxes on natural gas extraction and sales of tobacco products.

Senate Republicans entertained the idea of a tax increase, but House Republicans blocked it. So instead, Republicans developed a no-new-taxes plan that cuts business taxes and fills the gap by assembling more than $2 billion in one-time items, including postponing Medicaid payments, raiding off-budget programs and draining reserves.

Under the Republican plan, spending would increase $723 million, or 2.5 percent, over the current year’s approved budget. Another $220 million would be added to the books of the nearly-ended fiscal year, instead of the new fiscal year, making the entire package a $943 million increase, or about 3.3 percent.

Elsewhere in the Capitol, lobbyists patrolled the corridors while Corbett and House Republican leaders continued to work to win enough votes for public pension legislation backed by the governor.

At one point, the sound of a demonstration by public school advocates from Philadelphia and Pittsburgh boomed through the building. As police looked on, they crowded the tiled hallway between the offices of House Speaker Sam Smith and House Majority Leader Mike Turzai, and chanted “Whose house? Our house!” and “Hey hey! Ho ho! This budget’s got to go!”