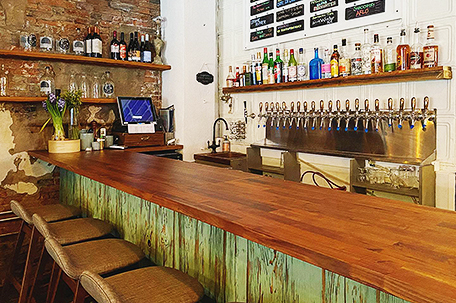 While they’re disappointed that they won’t be able to offer indoor dining on Friday, Philadelphia’s restaurateurs are looking at the bigger picture.

Friday, July 3 was supposed to be a big day for restaurant owners like Chris Fetfatzes.

Fetfatzes, owner of Hawthorne’s Neighborhood Beer Café and Brunchery, Wine Dive and Tio Flores in South Philadelphia was supposed to be able to open his restaurants to indoor dining that day.  But even before the City announced that indoor dining wouldn’t commence this weekend due to an increase in coronavirus cases, Fetfatzes had already made a decision of his own.

“I had a meeting with my staff and I told them that we wouldn’t be seating people indoors,” he said. “It’s important to protect my staff and guests. It sucks not to have indoor dining, but we have to have safety protocols. Plus, the guests just aren’t ready. So we’re taking this stance.”

On Tuesday, during a coronavirus briefing in which he told the assembled media that more than 200 people had tested positive for the virus, Dr. Thomas Farley, the City’s Health Commissioner, announced that the earliest City residents could start eating inside their favorite restaurant is Aug. 1.

While the rest of the Greater Philadelphia area had gone to full “green” status according to Gov. Tom Wolf’s coronavirus guidelines, the city had not, and that was because one size doesn’t fit all, Farley said.

“There were targets that we wanted to meet before we opened up to indoor dining, and we didn’t meet them,” he said. “This was a difficult decision because we know that while the virus kills, poverty kills too.”

But while that is the case, the rise in cases, most notably in Texas and Florida, makes this the best move for the city to make, Farley said. Taking a chance on Philadelphia heading into that territory is something no one wants to do, he said. While he understands Farley’s point, and even agrees with it, restaurant owners probably wouldn’t have felt as blindsided about the delay if the City was a better communicator, Avram Hornik said.

“You have to give businesses a chance to plan,” he said. “[The city] didn’t let us know that [indoor dining] wasn’t going to happen on Friday until Tuesday.”

One way to foster this communication would be to have someone act like a liaison to the City’s restaurant community. While restauranteurs know how to prepare good food, and create a great atmosphere that makes people want to sit down for a meal, they don’t necessarily know how to take advantage of the programs that will help them survive this latest setback, said Hornik, the owner of Morgan’s Pier on Delaware Avenue, Harper’s Garden on Rittenhouse Square and Rosy’s Taco Bar, 23rd and Walnut.

The city needs to help with that.

“There are a lot of small businesses that are in trouble,” he said. “You have a lot of people who know how to create a great experience for customers, but don’t necessarily know how to file a loan application or the paperwork needed to participate in a Small Business Administration program. If the city would appoint an ombudsman to work with these businesses, it would help.”

The SUN reached out to Mayor Jim Kenney’s office to find out if the city had a liaison to the restaurant community or if it had planned to appoint someone. At press time, we hadn’t received a response. While indoor dining is out for right now, outdoor dining, which was allowed by the city two weeks ago, is still going strong. You have to make reservations for most places, and some restaurants will have long waits, but it’s brought out the creativity in restauranteurs like Fetfatzes. Instead of spending thousands on Plexiglas to make the inside of his restaurant ready for diners, he spent money making the most of his outdoor spaces.

“I want my outdoor dining spaces to be an escape,” he said. “I want it to feel like a vacation for them. My job is to serve our guests safely and provide a sense of normalcy for them.”

Shopping malls and casinos will be open in Philadelphia during this modified “green” phase, although gyms are still closed. Hair salons, spas and barbers still remain open from last week.