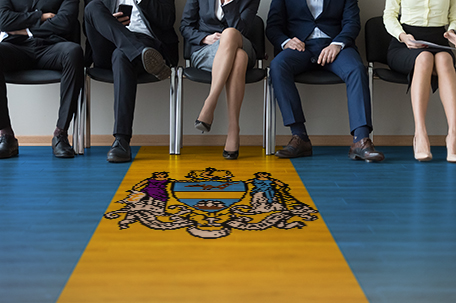 If there is one thing that most local politicians and candidates have learned over the years, is that in spite of its historically high voter turnout, you take the Northwest section of the city for granted at your own peril. The area boasts one of the most civically engaged constituencies in the city.

The “Meet the Candidates” night held last Wednesday at the New Covenant Church provided this savvy group of voters with the opportunity to speak with the current group of political hopefuls individually during a one hour long reception, prior to brief introductions and a moderated forum.

The forum’s moderator was Pete Mazzaccaro, editor of the Chestnut Hill Local.

The mayoral contest has unarguably received the most attention during the primary season, and is the one race most people are familiar with. That said, attendees enjoyed being able to speak with the candidates one on one prior to the forum.

During the Q and A, which contained both audience and moderator’s questions, the three mayoral candidates present (Mayor Jim Kenney did not participate) were asked about their respective positions on school funding, the 10-year tax abatement, the controversial soda tax and the issue of sanctuary cities.

Republican candidate Billy Ciancaglini was asked by the moderator to clarify his stance on sanctuary cities as was stated in a recent article, his response bringing about one of the most audible audience reactions of the evening. He is not in favor of the policy.

“I believe that when you say immigrants, there are many people that are here legally,” he said. “My family came here as immigrants, as did probably most families here. What I think we need to cut down on is people that are here illegally, and that is something that needs to be addressed. I understand that no one is saying that everyone has to go, and that everyone here illegally has to go, or is a criminal. But crimes committed by anyone who is here illegally is one crime too many.”

“We had a horrible incident where someone was kept here specifically by Mayor Kenney’s sanctuary city status… what I’d like to see done is some help [given] to people, to help them get their paperwork together, to get to stay here legally,” Ciancaglini continued. “But simply keeping people here and not cooperating with law enforcement agencies, I don’t think that’s a solution that is ever going to right itself…illegal is illegal,” Ciancaglini concluded.

One candidate who not only embraces the sanctuary city concept, but advocates for it, is Fernando Trevino, one of several Democratic candidates for City Council present that evening.

He was born and raised in Mexico before emigrating to the US, and has been an assistant diplomat and civil rights advocate for marginalized communities.

In these roles, he has reunited families at the border and assisted other immigrants as they navigate the complex American criminal justice system, and has learned the true value of representation.

If elected, Trevino will be the first immigrant to serve Philadelphia in this capacity, he said.

“During my whole career, I have seen firsthand the human cost of failed policies,” he told the audience. “I’m running because I do believe it’s time to bring the city back to basics. It’s time that we fix our streets, it’s time that we clean our neighborhoods, and it’s time that we think about public safety long term. But yes, that also that we’re providing short term and tangible solutions.”

The judicial candidates formed the largest group participating in the forum – 22 in total.

Kay Yu, Democratic candidate for Court of Common Pleas, recounted her journey from undocumented immigrant to 25 years as a successful lawyer. She was born in Korea, and was brought to the U.S, by her mother when she was 3½ years of age. They struggled financially, just living barely above the poverty line. Her mother was the one who taught Yu the power of resilience, she said.

“When I was 10 years old, I found deportation notices for me and my entire family,” she said. “By the time I was in college, I was working to navigate the new immigration laws that had just passed, and it gave me an opportunity to become my own first client of sorts.”

Yu filed an application for permanent residency. Sadly, her mother passed away before that version of immigration reform took hold. The process inspired her to attend law school. She became a naturalized citizen the same year she graduated. As a result of her experience, she is passionate about addressing the high poverty rate in Philadelphia — especially for children — and equal access to justice.

Theresa Brunson, Democratic candidate for Municipal Court, spoke about spending the first part of her career in public service, as an assistant DA for 10 years, a law clerk, a legislative director and chief of staff for City Council, and on the Pennsylvania Human Relations Commission.

She is also committed to community service, having worked with as program director for Mothers in Charge and in the area of domestic violence.

James Berardinelli, Democratic candidate for Court of Common Pleas, spoke about the connection between mental health issues and crime.

“The reason I’m running is to try to improve the way we diagnose and treat mental illness in the criminal justice system,” he said. “Right now, far too many of my homicide clients [and] have had six, seven contacts with the system, no one realizes they’re bipolar or schizophrenic until they kill somebody.”

During the City Commissioner candidate segment of the forum, business owner, committeeperson and community advocate Carla Cain gave a brief overview of her platform, which includes increasing voter registration and turnout, and automatic registration (where people have the option of registering on Election Day), among other things. Like virtually all of her fellow candidates for the office, she is also strongly in favor of civics education in the schools.

Candidates for Register of Wills, Sheriff and City Council at Large also participated in the 2 ½ hour long forum.

Election Day is Tuesday, May 21.