North Philly student heads for Oxford, asserts that community college was more than a stepping stone 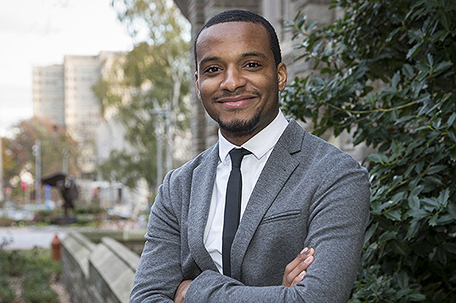 ABOVE PHOTO:  Hazim Hardeman, KLN ‘17, plans to pursue a doctorate after he earns his master’s degree at Oxford.  (Photography By: Temple University)

When Hazim Hardeman arrived on Community College of Philadelphia’s campus in 2012, he had no idea that he was destined to become a Rhodes Scholar, an honor that provides him entry into one of the most prestigious universities in the world.

Oxford University is a long way from North Philadelphia, where he grew up at 23rd and Diamond streets, providing a near clear view of Temple University and always reminding him that opportunity was but a few steps eastward, beyond him.

Those steps, however, weren’t as simple and easy as the actual walk to Temple’s campus. Hardeman graduated from high school with a 2.3 GPA, which delayed his enrollment eligibility into to Temple. Determined to rise above the adversity that surrounded him, he took a step south and enrolled in the College with the goal of raising his GPA.

During his time here, he did that and more.

“The rigorous academic experience, the opportunity to be involved in student life, and professors who are willing to invest in students have really been the main things to shape my experience at the College,” Hardeman said.

He worked hard to contribute to the learning community both in and out of the classroom, discovering various paths to success along the way. His hunger for knowledge and academic success led to an induction into the Phi Theta Kappa Honors Society, and his natural leadership skills resulted in his election as the 2nd vice president of the student body.

“Hazim … was always willing to enter the conversations to test his own thinking,” said Fritz. “[He] welcomed the challenge and in particular was motivated to push the development of his own thinking.”

Hardeman’s participation in the Honors program, which is designed especially for students who plan to advance into professional life and attend competitive four-year institutions, has left him grateful for the learning environment of the College.

“What makes Community College of Philadelphia special [is that] there’s people that are coming from such a wide array of backgrounds … you get a chance to have a dialogue with people who have experiences that are totally different than yours, but ultimately it’s productive because it lets you know that there’s more than one way to exist in the world.”

When he reflects back on the role that the College played in his development and success, it’s become more than a steppingstone.

“It’s not just a sort of a steppingstone, it’s a place where you can go and grow just like any other place,” said Hardeman.

The College’s question “where will you go?” is one that follows students beyond their time here. Hardeman can yet again answer that question with confidence.

He is going to the Oxford.