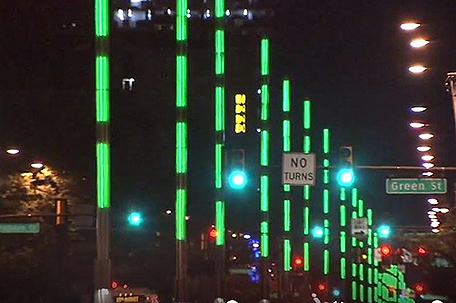 The 55 ft. tall lights newly named “North Poles” – that light up the Broad Street median from Hamilton Street to Glenwood Avenue debuted by turning green in celebration of the Super Bowl LII Champion Philadelphia Eagles’ first 2018 regular season home game. The New LED lighting was added to the North Poles after calls for improvement was sent to the community and stakeholders along North Broad Street.

“Most of the feedback we received simply questioned what they were and what they did,” states Shalimar Thomas, executive director of the North Broad Renaissance. “We took this feedback and decided to give the fixtures a name that represents the corridor, while also adding changeable LED lights that allow us to celebrate key events and awareness programs, and using it all as a marketing tool that promotes this historic corridor.”

According to Association for Public Art, public art can “express community values, enhance our environment, transform a landscape, heighten our awareness, or question our assumptions. Placed in public sites, this art is there for everyone and serves as a form of collective community expression.” In addition, research shows that lighting projects also attracts people to an area, boosting business earnings, and also increasing the opportunities for the social encounters that bond a community.

In 2017, NBR oversaw an enhancement project for the North Broad Poles that included an LED upgrade and allows them to change colors in order to commemorate special occasions, holidays, and causes. In the same year, the North Poles were awarded Project of the Year by Mid-Atlantic chapter of the Construction Management Association of America.

For those interested in experiencing the North Poles, the best time to visit is just before sunset to see the transition and the color of North Poles revealed.

For more information about the NBR, the North Poles or to see what the color represents, visit northbroad.org.