No Struggle, No Progress 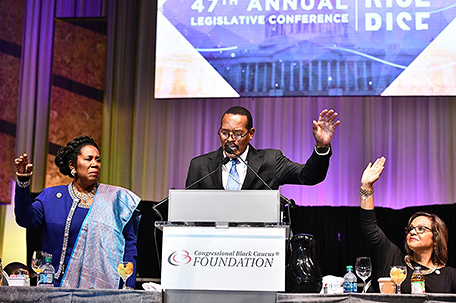 Last week’s Congressional Black Caucus Foundation conference looked at ways that African Americans have both been tested and have triumphed since being forced onto American shores.

This year marks the 400th anniversary of the first ship filled with enslaved Africans landing on American shores.

With a theme of “400 Years: Our Legacy, Our Possibilities” the Congressional Black Caucus took time to recognize that anniversary during its  annual Legislative Conference last week by looking at that legacy, the ways that it has impacted Black lives and the ways the community continues to move forward from it.

It was the first CBC Annual Legislative Conference for new CBC Foundation President David A. Hinson and the moment wasn’t lost on him. The strength and perseverance of the descendants of the Africans who came to these shores in 1619 is something that is especially important now, he said.

“Our theme reflects on the incredible journey that African Americans have undertaken from the moment the first Africans landed on these shores in 1619,” he said. “Our travel has been a journey of unspeakable pain and immeasurable achievement. We have gone from being the free labor that undergirded the U.S. economy to being social, political and economic influencers, not just in the United States, but around the world. The 55 members of the Congressional Black Caucus, the largest that this group has ever been, are a testament to how far we’ve come.”

But while there’s been a lot of progress in the Black community, there is still some progress to be made, Hinson said.

And while there were a variety of social events —- Saturday night’s Phoenix Awards dinner, Saturday morning’s Prayer Breakfast, and a variety of parties including one honoring Philadelphia’s own Rep. Dwight Evans —- the theme for the conference and the current political climate demands seriousness, said Rep. G.K. Butterfield of North Carolina, who co-chaired this year’s conference with Florida Rep. Fredericka Wilson.

“This is not a group that’s here for just social purposes,” he said. “We’re here about business”

There were a variety of workshops that talked about issues ranging from voting rights to climate change and the 2020 Census. The conference also included a town hall meeting that looked at the status of Black men and boys. There were also workshops that looked at women as voters, as businesspeople and leaders, as well as a health and wellness luncheon that focused on diabetes and the insulin crisis and a presidential town hall.

But many of the workshops focused on the implications of slavery and how they continue to manifest themselves economically. Rep. Evans held his annual State of Black Small Businesses, moderated by the Rev. Benjamin Chavis and there were several workshops that focused on alternative forms of economics such as hemp and cannabis cultivation.

One of the sessions, “African American Women In The C-Suite: How Did You Get There? Is It Worth It?” brought together a group of high-powered business women to talk about their experiences in the corporate America. Moderated by Sarah Glover, former president of the National Association of Black Journalists, the women —- Michelle Brown, vice president and CEO of American Airlines, Tonya Hallett, executive director of human resources for General Motors, Carla Harris, vice chairman and managing director at Morgan Stanley, Wendy Lewis, vice president for global diversity and inclusion efforts for McDonalds, Karen Morton,  senior vice president and compliance officer for Liberty Mutual, Susan Reed, managing director/diversity and inclusion for Morgan Stanley, Nilka Thomas, vice president at Lyft, and Bari A. Williams, vice president of legal business and policy affairs at All Turtles —- told their stories of life in the C-Suite and how they’ve negotiated things there.

This year also marks the 25th anniversary of the 1994 Crime Bill, so criminal justice, education and the places in which they sometimes intersect were also a focus of this year’s conference.

The documentary “Pushouts” focused on the treatment that young Black girls sometimes receive from the American educational system when it comes to discipline and perception of deviant behavior and included a panel discussion on the topic.

Another documentary discussed that featured the intersection of education and criminal justice was the film “Prison Behind Bars.” Directed by Lynn Novick and presented by award-winning documentarian Ken Burns, the film focuses on the Bard College Prison Initiative, one of the few prison college programs that survived the 1994 Crime Bill, which took the Pell Grant funding holding up most inmate education programs away.

BPI was a privately funded program, so it was allowed to continue. During the Obama Administration, a pilot program called the Second Chance Pell Grant Program was initiated. About 12,000 inmates were allowed to attend school thanks to this program and Congress is currently trying to make the program permanent.

“College Behind Bars” premieres on most PBS stations on Monday and Tuesday, Nov. 25 and 26, at 8pm.