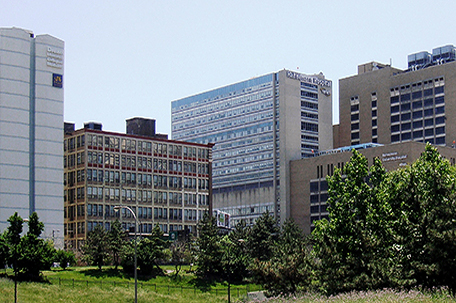 After weeks of negotiation, talks between the City of Philadelphia and the owners of the now-shuttered Hahnemann Hospital have come to an end.

Since the coronavirus arrived in Philadelphia, officials concerned about the strain that a massive number of infected people could put on the City’s healthcare system, have called for the reopening of Hahnemann University Hospital.

During his Thursday briefing on the virus and its impact on the City of Philadelphia, Mayor Jim Kenney dashed those hopes by announcing that negotiations between city officials and Joel Freedman, the investment banker who owns the now-shuttered hospital, had come to an end.

The city and Freedman couldn’t get on the same page, Kenney said. First, he wanted the city to buy the hospital, which it couldn’t afford to do. Then, he asked that the city lease it for a year, which the city didn’t need to do.

When Freedman asked the city for $400,000 per month to lease the space, and the city found that declaring eminent domain would not only require it to buy Hahnemann at market rates, but would take a long time to accomplish, Kenney and the city walked away.

“We need to focus on the crisis at hand — including the need to develop facilities that will serve as field hospitals, as quarantine space, and as isolation space — facilities that will help save lives,” Kenney said. “We will focus our energies on working with other property owners in order to find temporary solutions to these absolutely vital needs. And I fully expect that we will find owners who are ready and willing to step up, to work with us, to do what is best for all Philadelphians.”

When reached for comment, Sam Singer, spokesman for Hahnemann University Hospital owners Broad Street Healthcare Properties, said the city didn’t actually come to them with an offer, so the property owners made one that they thought was reasonable.

“We tried to cooperate with them in every way,” Singer said. “We thought it was a good, honest and heartfelt offer because we had a desire to assist the city and the community. We appreciate and applaud the city’s efforts to address the coronavirus quickly. We understand that the site doesn’t meet their urgent needs right now, but if the needs change, we stand ready to assist.”

According to Dr. Thomas Farley, Philadelphia’s health commissioner, the city picked up another 127 cases of the coronavirus between Wednesday’s briefing and Thursday’s briefing, bringing the total number of cases to 475. Of that group, 40 are in the hospital, he said.

On Wednesday, Farley announced the city’s first death from the virus.

As the number of people who are not only getting tested, but being confirmed as having the virus is going up, it’s important for everyone to observe the city’s stay at home order, Farley said.

But because there are those out there that are still ignoring that order, Philadelphia City Council has decided to get involved with making sure their constituents get the message.

During a shortened City Council session on Thursday, the body voted to give itself the money to try and change those statistics.

As part of a $85 million appropriation bill that was passed out of the Committee on Appropriations on Thursday, Council added an amendment that would give Councilmembers $400,000 to use toward getting the word out about the virus to their constituents, as well as other information constituents need to get through a global pandemic.

Because one of the more jaw-dropping numbers that Farley gives in his daily briefings is the number of people aged 20-39 who have tested positive for the coronavirus, it’s become obvious that there are folks out there who don’t grasp the seriousness of the disease, Council President Darrell Clarke said. At Thursday’s briefing, Farley said that age group accounts for 216 of the city’s 475 cases.

Obviously, there’s been a failure to communicate, Clarke said. And Council can’t allow that to continue.

“If you go out into the neighborhoods, you’ll see that people aren’t practicing social distancing,” Clarke said. “We have to be more creative about how we’re getting the information out to people.”

Among the creative ways that Council plans on doing this is mounting an “aggressive” social media program that lets constituents know that while staying home is more than a little inconvenient, it’s got to be done to flatten the coronavirus’s curve, Clarke said.

There are also plans to give the messaging the personal touch, said Councilmember Maria Quinones Sanchez, chair of the Appropriations Committee. Since most Philadelphians aren’t watching the daily news conference, someone familiar to them has to take the reigns, she said.

“Sometimes, you need to get the information from people you trust,” Quinones Sanchez said.

The rest of the $85 million allocation is going to Managing Director Brian Abernathy’s office to help the city be able to do what it needs to to help citizens get through this pandemic, including finding spaces for people who can’t quarantine at home and possible space for mobile hospitals should the virus spread to the point that hospitals are taxed, Quinones Sanchez added.

Council is scheduled to vote on the Appropriations Bill during a virtual session they’ll be holding next Thursday.