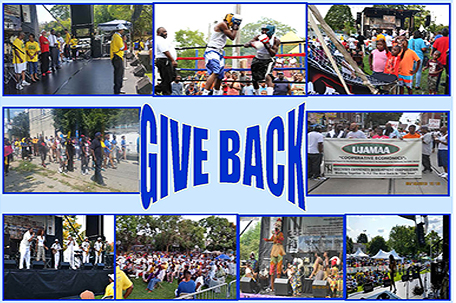 The Nicetown Community Development Corporation (NTCDC) is gearing up for the 13th annual Give Back Festival.

While this festival will include lots of ats and entertainment for participants, it’s purpose is scholarshps for Nicetown’s young people. The ZAR Education Scholarship is a direct response from founder Zakariyya Abdur-Rahman to losing his eldest son Zakee to violence.  Education is a way out of the streets, and with the scholarship, children have a stronger incentive to further education, he said.

Adbur-Rahman and COO Majeedah Rashid work together producing a series of events throughout the year, but the festival generates excitement as it brings people from various areas into Nicetown to see the community thrive through their arts and culture initiatives.

The festival lasts from August 7th-8th and there will be tons of activities including the Walk for Peace, ZAR Education Scholarship giveaways, a Youth Amateur Boxing tournament, and Triumph Baptist Church’s Sunday Glory Fest Choir Competition.  Block captains, youth, educators, small business owners and city officials are also recognized for their service.

Those familiar with the neighborhood know how far it has come.  Once a delapidated neighborhood riddled with crime, it took over a decade to change the perception residents and Philadelphians had of Nicetown.  Within the time the NTCDC has been organized, the neighborhood has been revitalized a great deal, allowing residents access to more involvement in community initiatives.

“We have changed the culture of the people who now are really taking responsibility of their community whereas previously they would not want to be involved,”  Abdur-Rahman says. “Today we have over one hundred consistent block captains.”

Block captains are essential to keeping children off the streets and crime rates down.

Rashid wants the people of Nicetown to understand the power of mobilization, but her goal is to generate activism through history and culture coupled with arts and economic development.

“A lot of the times we have to reeducate our people to mobilize them.  Bring them back and remind them of where we came from.  These things that are going on in our community [crime] we believe that’s related, that we’ve forgotten our history and that’s why the festival is so important,” she says.  “It’s more than just a party; it’s a strategic environment with the goal to remobilize our people.”

Although the NTCDC is based in Fishtown, the initiative spans portions of Logan, West Oak Lane, Somerville, and Hunting Park neighborhoods, offering Philadelphia residents opportunities to volunteer all year.  The more committed the neighborhood is to engaging residents; the more likely it is for state and local government to empower the community with proper resources.

Within the next five to 10 years, Abdur-Rahman and Rashid would like more scholarships for youth, better employment and training, and an informed community to arise.  Both activists live true to the organization’s slogan, ‘working together to put the nice back in the town.’  With the persistent leadership of the NTCDC and the Nicetown residents, the Give Back Festival will reach exceptional heights for years to come.