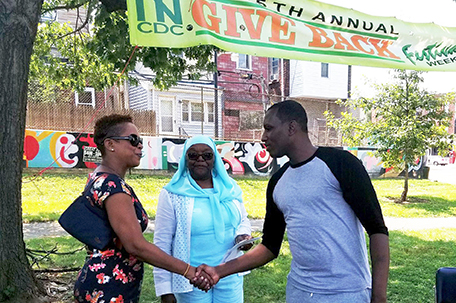 Nicetown Community Development Corporation celebrated the neighborhood is serves with the 15th Annual “Give Back” Community Festival and Concert, highlighting development, arts and culture in the Nicetown community. The two-day free festival will kick-off Friday August 11th and culminates on Saturday August 12, with an array of performances, community activities, vendors and a health pavilion.

Headlining the two day event will be acclaimed R&B Artist Alyson Williams, singer  of the 80s blockbuster hit, “Just Call My Name.” Coined “The First Lady of Def Jam,” Williams is an R&B singer who had a string of additional hit singles in the late 1980s and early 1990s. Some notable track include “Sleep Talk,” “My Love Is So Raw” and “I Need Your Lovin.”   The daughter of bandleader/trumpeter Bobby Booker, she began her career by singing background vocals for various artists including, Curtis Hairston. Melba Moore (“Love’s Coming At Ya”), B. B. & Q. Band, Cashflow, Unlimited Touch, Bobby Brown and Barbara Mitchell before joining the group High Fashion, which also featured Melisa Morgan. Her first single — “Yes We Can Can” — was first released on Profile Records in 1986; a release on the Def Jam label followed in 1987. At the label, she established herself as an in demand vocalist, duet with many of her label mates including Chuck Stanley (“Make You Mine Tonight”) and Oran “Juice” Jones (“How To Love Again”).

Her first album release and the first R&B female singer signed to Def Jam, she released the album Raw in 1989. The album produced the singles “My Love is So Raw,” featuring female rapper Nikki D, and “Sleep Talk”. In addition, the single “Just Call My Name” was a hit on the Billboard R&B charts reaching number #4. The song, picked up by many “Quiet Storm” formats, is now considered a cult classic and is still played. The album included a duet with the Blue Magic vocalist Ted Mills on “We’re Gonna Make It.” Her single “I Need Your Lovin’” was also #8 success in the UK, as well as another R&B hit for her.

President and CEO of Nicetown CDC, Zakariyya Abdur Rahman states, “The 15th Annual Giveback festival highlight’s the achievements both individually and collectively as a community and demonstrates what unity of purpose can accomplish. We are proud to bring our festival to the community for the 15th year and have renowned R&B artist, Alyson Williams joining us along with our sponsors, supporters and more importantly the community residents of Nicetown.”

The festival begins Friday, with a college fair, Ballin’ For Peace basketball clinics, health screenings and resource fair, scholarship presentations, step show by historically Black Greek letter fraternities and sororities and Hip Hop concert produced by Jarell K. The activities will kick off on Saturday with the Walk for Peace, talent showcase, Ivan Robinson Amateur Boxing Tournament, health and resource fair, culminating with the Saturday evening concert with the “First Lady of Def Jam, “Alyson Williams” and band tributes to musical greats, Isley Brothers, Maze, Rufus featuring Chaka Khan, and Teddy Pendergrass. The Saturday evening show will be produced by  Mike Jones/Uptown Entertainment, with DJ Toney B on the turntables.

This community initiative includes a comprehensive clean up of Nicetown Park spearheaded by PowerCorps, a program under the AmeriCorps umbrella, designed to address environmental stewardship in Philadelphia. Chief Operating Officer of Nicetown CDC Majeedah Rashid said, “The ‘Give Back’ is a unique community celebration that utilizes arts and culture to engage the community as stakeholders in the economic revitalization of Nicetown and surrounding communities.”

Joining the event as a featured supporter and sponsor is Councilwoman (D-8th Dist.) Cindy Bass. “I am honored once again to partner with Nicetown CDC on their 15th Annual Give Back Festival. This is truly a testament to the commitment of the Nicetown community,” she said.

The Nicetown Community Development Corporation (NTCDC) has a mission to dynamically improve the quality of life in Nicetown and surrounding communities, by establishing sustainable community economic development. The NTCDC was founded in 1999 by members who collectively bring decades of experience in developing the community.