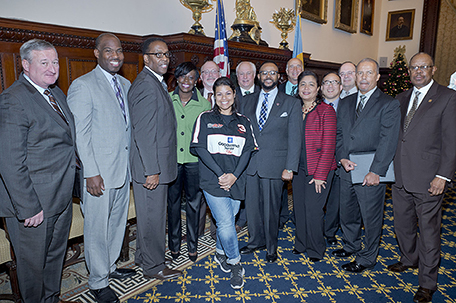 Monica Parrilla, owner of Marz Auto Center in Hunting Park, loves her job but sometimes the challenges can be difficult to bear.

Her four employees and their families rely on her and her auto repair business for their livelihood. She is working for her customers, and for them.

On Monday, Parrilla, clad in a Dale Earnhardt pullover shirt, was breathing easier. “Power Up Your Business,” a new initiative funded by City Council and created by Community College of Philadelphia, aims to help her company grow, and the neighborhood along with it.

“There are workshops and grants for businesses with large revenue streams but small businesses like mine are excluded because we don’t meet the benchmark,” said Parrilla, who will serve as a member of the “Power Up” advisory board. “Small businesses have the power to keep the local economy moving, provide jobs in our area and to increase our revenue.”

From Hunting Park to Wynnefield, from Logan to South Philly, small businesses — the barbershops, the bodegas, the laundromats — throughout the city’s 265 neighborhood commercial corridors are the economic drivers of the city. Yet, those businesses are oftentimes overlooked in economic development conversations.

“Power Up” will help kick-start the conversation, block by block, and introduce the city to a group of unsung heroes– the men and women whose businesses keep neighborhoods and communities strong and who serve as job creators.

Starting Jan. 11, the College will offer workshops that cover the small business financial management, personal and business credit and neighborhood-based marketing. The workshops will be held at the college’s main campus and three regional centers, starting with the Northwest Center.

It will also offer 10-week training programs for up to 25 businesses at a time for a total of 100 businesses in one year. The college will match the participants with a business coach and introduce them to small business resources.

Mayor Jim Kenney said the new program, championed by Councilwoman Cherelle Parker will keep the commercial corridors, which are an integral part of the city, and they impact the economic health at the neighborhoods they serve.

“At the end of the day, stronger local businesses mean more jobs and better neighborhoods for all Philadelphians, and I think we all can get behind that,” Mayor Kenney, who has advocated for opportunity for every resident of Philadelphia, said. “When neighborhood businesses are strong, neighborhoods are safer, home values go up, more people are working, there’s more of a community feel in the neighborhood.”

City Council hatched the idea and created funding for “Power Up Your Business” in response to the sugary beverage tax imposed on small business owners earlier this year. “To me, consumption was driving the argument. Not enough was about ownership,” Councilwoman Parker, who shepherded the $800,000 program through the budget process, said. “With that in mind, we were able to come together about the development of the program.”

“The College has one simple goal,” Dr. Generals said, “make every neighborhood the best it can be, by helping every business prosper.”