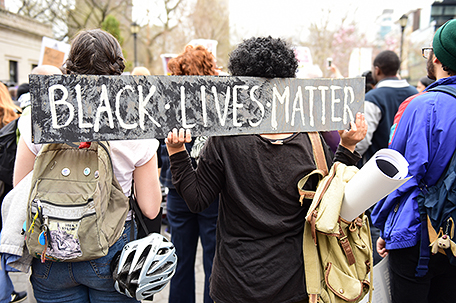 Updated | In the aftermath of the chaos that erupted in Philadelphia as Eagles fans tore through the streets celebrating their Super Bowl victory, many could not help but notice the difference in how the public and officials reacted to riots by fans compared to those prompted by civil unrest.

“Somehow, it seems there’s a line drawn in the sand where destruction of property because of a sports victory is OK and acceptable in America. However, if you have people who are fighting for their most basic human right, the right to live, they will be condemned,” Black Lives Matter New York President Hawk Newsome told Newsweek.

Emergency responders struggled to keep up with rioters as they marched through Philadelphia streets leaving destruction in their wake. Revelers reportedly ripped down light posts, caused entire structures to collapse, and damaged vehicles and store buildings as they celebrated the Eagles’ 41-33 victory.

But officials appeared slow to condemn the destruction caused by rioters, offering seemingly gentle requests for everyone to “go home.”