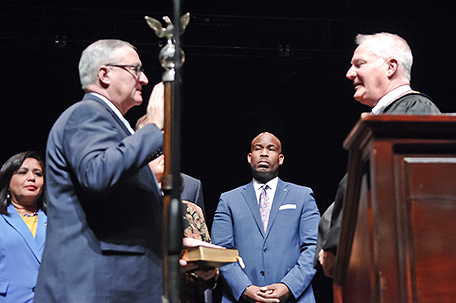 During Monday’s City of Philadelphia inauguration ceremony, it was a mix of the old and the new

During the April 2019 primaries and the November general election, the citizens of the City of Philadelphia voted to make more than a few changes to their government.

On Monday, the people who represent those changes, and the people they’ll be working with to make life better for all Philadelphians, were sworn into office.

For the 194th time in the City’s history, Philadelphia’s Mayor, City Council, and holders of row offices and the judiciary took the oath of office in inauguration ceremonies. For the first time, the ceremonies were held at the Met Philadelphia on North Broad Street.

In his inaugural remarks, Mayor Kenney struck an optimistic tone that recognized the challenges the city still faces, but touted what he considers the successes of his first term.

“In 2016, we embarked on a mission to tackle some of Philadelphia’s biggest challenges — a struggling public education system, an inequitable criminal justice system, intergenerational poverty, record-setting public health crises, and much more,” Kenney said. “Our goal was clear — to increase equity and opportunity so all Philadelphians, regardless of their zip code, can reach their potential and lead fulfilling lives.”

But the first term wasn’t without its bumps. The good news is: the Sweetened Beverage Tax created funded new pre-kindergarten slots and revamped recreation centers through the Rebuild Program. The bad news was: the court battle waged by anti-tax forces kept that money from being spent right away. The plan to put harm-reduction centers in drug ravaged neighborhoods to combat the opioid epidemic has gone nowhere.

And no one seems to be following the Philadelphia Roadmap for Safer Communities because 355 Philadelphians were lost to gun violence in 2019.

Because nothing else is possible unless the City’s citizens feel safe, that is the administration’s top priority in a second term, Kenney said.

“It’s no secret that the hardest part of this job for me has been addressing the senseless and unspeakable violence that happens on our streets every day,” he said. “Talking to the moms and dads, brothers and sisters, aunts and uncles, of the young men and women cut down on the streets of Philadelphia has left deep scars on our communities, and frankly, on me personally. We are committed to reducing shootings and homicides and fighting for common-sense gun reform so these tragedies can end once and for all.”

But to get his pledges turned into progress will require some help from the 17 members of City Council.

While there were some changes in council due to the elections, there were few changes when it came to Council leadership.

Darrell Clarke won his third term as Council President by a unanimous 17-0 vote. When he took the podium at the Met, which is in his Councilmanic district, Clarke addressed something that North Philadelphia has been dealing with for a long time: some of the city’s most intractable poverty.

Because Philadelphia is still the nation’s poorest big city, connecting residents with the skills that help them rise from poverty is a priority, Clarke said.

Invoking the image of the collaboration that led to America’s being able to put a man on the moon in the 1960s, Clarke made a plea to all of the city’s stakeholders for help in putting a dent into this longstanding problem.

“I’m calling on everyone – the business community, our top universities, non-profit organizations, city government and all our citizens to work together on the goal of lifting 100,000 Philadelphians out of poverty by 2024,” he said. “That’s an effort worthy of a world-class city. This is our city’s moonshot moment.”

Among the things he wants to do to move move the poverty needle is to narrow the skills gap among Philadelphians by creating more educational opportunities and, once that work force is created, use the lessons learned from the city’s unsuccessful bid to be Amazon’s second home to attract Fortune 1000 companies to the city, Clarke said.

Joining Clarke in Council leadership will be Councilman Mark Squilla (D Majority Whip), Councilman Curtis Jones (Majority Whip), and new Council Majority Leader Cherelle Parker. Parker replaces Councilman Bobby Henon, who will be heading to court as part of the federal indictments against Local 98 leader John Dougherty and others in 2020, in the post.

“It’s an honor and a privilege,” Parker said when asked about her new post. “It’s an honor to work with all of the members of Council. I think we’re going to do great things.”

Following the inauguration, celebrations were held around the city for the newly installed officers. City Hall was especially festive during an open house that featured every kind of food, drink and music possible.

While the inauguration was technically the first session of City Council for the new term, Council will actually return to work on Thursday, Jan. 23 at 10am.