New social challenges and opportunities steered the agenda at the A.E.A.O.N.M.S. Annual Convention 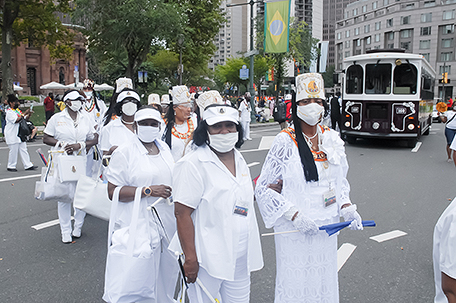 The convention was one of the first major gatherings in Philadelphia since the COVID-19 pandemic and allowed the organization to face new challenges and opportunities as its 2022 program year rapidly approaches.

Philadelphia is home to the 44th Imperial Potentate Noble John T. Chapman, who said A.E.A.O.N.M.S. plays a vital role in improving the lives of our citizens every day. For the duration of the meeting — which took place from August 13 to 19 — the organization’s membership stayed dedicated to the principle of fostering civic, economic, and educational development programs throughout the world.

“As an organization with a rich and robust past history of community support, we must recommit ourselves to focusing on communities and the many needs that go unaddressed,” Chapman said as he addressed over 500 attendees at a congratulatory luncheon that was held in his honor on August 14.

As the organization seeks to reset its 2022 focus, Chapman advised the approximately 10,000 convention delegates that many of the meeting’s topics were driven by the COVID-19 pandemic. As the country slowly emerges from the pandemic, he also noted that a new set of organizational and program challenges would confront A.E.A.O.N.M.S. going forward.

“The challenges of food insecurity, finding gainful employment, getting adequate and affordable medical care, the proliferation of gun violence and more plague our cities from coast to coast,” Chapman said as he asked all Nobles as well as Daughters led by Jacqualine Brown Arradondo, who is the 48th Imperial Commandress, to develop program approaches to dealing with the stated challenges.

Convention guests included Opal Lee, a 94-year-old activist considered the “Grandmother of Juneteenth,” Leon Russell, chair of the NAACP board, and actress Sheryl Lee Ralph Hughes, star of stage, screen and television, who were recognized for their public service.

To ensure COVID-19 protocols were being observed, face masks and sanitizer were provided to registered delegates to ensure a safe, healthy meeting environment.

According to Chapman, the meeting in Philadelphia is a historic moment for A.E.A.O.N.M.S., which traces its roots back to 1893 and Philadelphia has played an important role in the organization.

A meeting that was held in Philadelphia on December 12, 1900, when the late Illustrious Potentate of Pyramid Temple Isaac L. W. Holland convened a reorganization session that was attended by offices and members from Temples in Philadelphia, Pittsburgh and Alexandria, Virginia.

At this meeting, the new name Imperial Council of the Ancient Egyptian Arabic Order Nobles Mystic Shrine of North and South America and its Jurisdiction Incorporated, was adopted.

The decision to hold the convention in Philadelphia had a positive economic impact on the city. Chapman was instrumental in making that choice.

The convention attendees spent time at the Pennsylvania Convention Center attending meetings and visiting vendors that sold everything from clothing to organization memorabilia. The sums of money spent at such conventions generates large amounts of revenue for the city and small businesses, and creates employment opportunities for job seekers.

“These efforts are strengthened and enhanced by many local organizations and run by exemplary leaders who give so much of their time to help, direct, recruit, and inspire others to service,” Kenney said. “Philadelphia is proud of the good work being done every day by its residents and commends those organizations and their leaders who ensure that this valuable work is supported and sustained.”

For convention-goers who ventured out beyond the Pennsylvania Convention Center and their hotels, they were greeted by an array of services, restaurants, historic sites and attractions, according to Marva Montgomery, a member of the Imperial Council Planning Committee.

Shriners and their families, as they traveled in open-air tour buses, followed in the steps of the Nation’s founding Fathers at Independence Hall. They explored the cultural amenities of the African American Museum in Philadelphia and traditions such as running up the famous “Rocky Steps” at the Philadelphia Museum of Art.

Others, according to Montgomery, visited the Reading Terminal Market, one of the country’s largest and oldest public markets housed, since 1893, in a national Historic Landmark building. The market offers a broad selection of locally grown produce and locally sourced meats and poultry plus an array of great seafood, cheeses, baked goods, and confections. There they found everything to make a great meal, plus the broadest variety of world-renowned restaurants under one roof.

“Many convention-goers were not disappointed. They didn’t forget to grab a Philly cheesesteak or a pretzel or two,” noted Montgomery, who also pointed out that the clam chowder lured many to Pearl’s Oyster Bar. Some joined the many that elected to stand in a long winding line for Beiler’s Donuts. Others made their way to The Dutch Eating Place, a Pennsylvania Dutch counter service restaurant in the market which offers home-style breakfasts and lunches.

On Wednesday, the convention culminated with the Annual Shriners Parade. There was a Grand Viewing Pavilion at Logan Circle. Starting at 21st and Market Streets, the procession made its way to lower Market Street. Displaying an array of pageantry, symbolic of a Shriners parade, Nobles and Daughters wore their Shriners Parade walking suits and attire. As they marched in the procession with fellow members from various Oases (states) and Deserts (cities), they were joined by the parade clowns, who entertained the parade-goers with light-hearted merriment.

Most Shriners Temples support several parade units. In addition to entertaining the public, these units are responsible for promoting a positive Shriner image. The parade unit often includes some clowns performing comical antics and while others perform stunts as they drive miniature cars powered by lawn mower engines.

Nobles and Daughters who joined the Parade

•  Omar Temple No. 21. Oasis of Savannah and Desert of Georgia.

•  Oasis of Nassau/Oasis of Freeport and Desert of Bahamas

•  Oasis of Waukegan and Desert of Illinois

•  Motor Patrol Zaha Temple No. 52. Oasis of Omaha and Desert of Nebraska

•  The Women TUWA Court No. 210 Imperial Court. Oasis of Annapolis

and Desert of Maryland

Prior to the parade, there was a presentation of scholarships and school supplies made to the John B. Kelley and Prince Hall Schools.

“Each year, such presentations are symbolic of the Shriners commitment to community service and helping the underserved,” according to Chapman.

A.E.A.O.N.M.S. is a worldwide fraternal shrine family with a membership of approximately 35,000 in some 227 Shrine Temples and 200 Courts, as well as its women’s auxiliary, the Daughters of Isis. These entities can be found throughout the continental United States, and in Canada, Germany, Italy, Spain, Hawaii, Japan, Korea, Guam, Thailand, Panama, and The Bahamas.