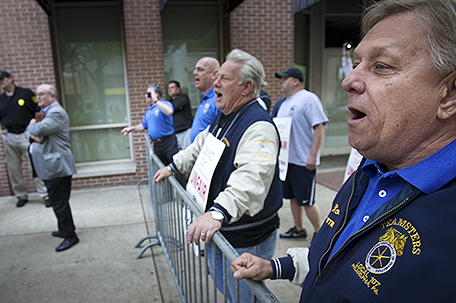 The $780 million expansion of the Philadelphia Convention Center, fully funded by tax dollars, was billed as the key to increasing revenue for the hotel, restaurant, and hospitality sector in Philadelphia. The goal of increasing the facility to 974,000 sq. ft. gave the Center the capacity to handle one large convention, along with two smaller ones simultaneously.

Since completing the expansion in 2011 however, the Convention Center has failed to deliver on the increase in bookings it promised. The center had 20 conventions book in 2013, but that number continues to decline to less than half of the number projected, with just eight large gatherings scheduled by 2016.

The problem cited for years by Convention Center meeting planners and others has been labor problems, with many groups or associations either cancelling or postponing their plans to return. The issues haven’t just been poor workmanship, or labor hassles, but unpredictable labor costs, which included high overtime costs.

Costs at the Philadelphia Convention Center are among the highest in the nation, rivaling those of New York, Boston, Chicago and Orlando. (Union rates for carpenters start at $65.01 p/hr.)

But the old Customer Service Agreement expired, and new management company SMG offered the six Convention Center Unions a new Customer Satisfaction Agreement, which would implement some major changes at the Convention Center, including allowing exhibitors to set up their own booths.

Four of the six unions signed the agreement, but the Carpenters and the Teamsters failed to meet the May 5th deadline. Although those two unions have since signed and delivered the agreement to Convention Center management, they have been locked out for failure to do so on time. The unions claim they were told they had until May 10th, while Convention Center management deny that claim. The Teamsters and the Carpenters unions also accused the Convention Center of unfair labor practices in a National Labor Relations Board charge filed against the center.

The Teamsters and the Carpenters unions also expressed their discontent with the decision by three of the four unions who did sign the agreement to escort their members across the picket line to set up the Industrial Biotechnology Conference in May.

Despite all the confusion of labor disputes and picket lines, there have been improvements under the new agreement. In fact, the four unions who set up and dismantled the Biotech Conference were able to do so three hours ahead of schedule. Something unheard of in Philadelphia.

Ryan Boyer of Laborers Local 332 praised the Customer Satisfaction Agreement, citing that it will most importantly prevent any major labor strife at the Convention Center for the next 10 years.

“Labor wasn’t the only problem”, said Boyer, “but it was a part of the problem. And that problem extends to everyone: hotels, restaurants, and businesses.”

It seems for now the fire has died, although the issue with the Carpenters and the Teamsters still has yet to be resolved.

The hope is that the city will begin to experience a renaissance in its hospitality industry. The Philadelphia Conventions and Visitors Bureau staff has already begun to boast of the new work rules at a breakfast with Convention Center managers and meeting planners. “It was a great meeting”, said Jack Ferguson, of the PCVB. “Meeting planners had liked our expansion, but had been put off by the cost, labor, and most importantly, the hassles”.

It seems, at least for now, the Convention Center’s new Customer Satisfaction Agreement is working, and that is a huge step towards repositioning Philadelphia as a top destination, and attracting more conventions to the facility.