New group of “Stop The Violence” advocates speaking out 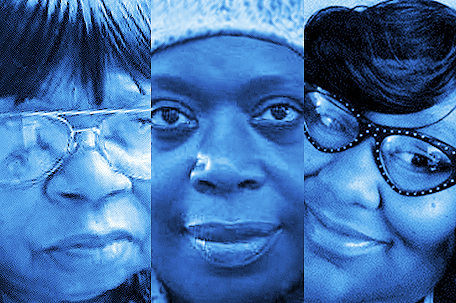 ABOVE PHOTOS: Pictured (left to right): Melodie Jackson along with Imani Badie, one of a number of new community activists coming up in Philadelphia who is on the front lines, addressing mental health and violence and Benita Tillman –all on the same mission.

These days, some leaders, elected officials, medical experts and grassroots community groups are referencing the phrase, “There’s two pandemics going on in America. There’s the COVID-19  pandemic and there’s the violence pandemic.”

Violence isn’t just happening in Philadelphia; it’s happening in many urban areas, according to statistics from police departments across the nation and the FBI.  In Philadelphia, activists are familiar with a lot of the old guard “stop the violence” groups such as The Philadelphia Anti-Drug/Anti-Violence Network, Mothers In Charge, The Father’s Day Rally Committee, and several others.

These organizations are all still vital today. However, new groups and individual activists are stepping up and speaking out on all the crime and violence in Philadelphia. Among the new people working under their own steam, are four who all have a connection through a nonprofit organization called the National Association On Mental Illness (NAMI), Philadelphia chapter. Each of them have testimonials.

The fact they’re doing something to try and make some positive change amongst youth, with anger management issues or other mental health hurdles, is a plus.

Imani Badie is one person determined to create safety nets for youth and families. She is the co-chair for the Philadelphia System of Care Leadership Team under the Department of Behavioral Health and Intellectual Disabilities.

“I have personally been impacted by violence.” Badie said. “My son was murdered at 22, my other sons were victims of gun violence. I have several friends who have lost children. At the location where I work, we assist men in crisis. We’ve lost a few of our men to violence who’ve been part of some of the group sessions I’ve facilitated. I strive hard to help others impacted by violence in my community. I’m saddened by what’s happening in our city. We have programs that offer support. However, the programs don’t reach the ones that really need help. On top of that, we have a lot of prideful people who are not going to ask for help.”

“Violence is a learned behavior,” Badie continued. “Parents and caregivers have to start modeling more positive behavior. , I’m big on parenting programs. They can strengthen already existing skills, while teaching new skills to deal with life’s challenges. It starts with us, the parents. We can make a difference in reducing the violence. We have to stop operating from a space of “self-hate” to “self-love”. Only then will we make an impact on violence”.

Badie is also a board member for the Black Women’s Health Alliance. They offer parenting workshops and other special programs. They can be reached at (215)225-0394, or by visiting: https://www.pbwha.org.

Health, where she is a family specialist, which she says she’s passionate about.

“I know what Imani is hoping we do is to share what we do and how we support other families.” Jackson said. “I support families who have children with special needs and unique challenges. We work to support the parents, empower the parents, and [teach] them how to be their child’s best advocate. Some of the parents we’ve worked with have now moved on to become Family Peer Specialists themselves. They’re working in the field. I’m currently supervising three parent peer specialists right now.  What we’re doing is really growing. I’m also doing work with gun violence survivors.”

Jackson is an example of someone who works in a field that has been a personal experience for her, because she suffers from a depressive disorder and sought help for herself when she knew she needed it, and for her son.

“I only have one son, and help was sought as he is a survivor of gun violence, having been shot eight times in my presence,” she said.

The work Jackson does is personal, and as she reaches out and helps families in crisis because of violence, when she says she “understands,” it’s a sincere statement. The City of Philadelphia Department of Behavioral Health and Intellectual Disabilities can be reached at (215) 685-6440, which is the emergency mental health crisis line. You can also learn more about the programs by visiting: www.phila.gov/departments/department-of-behavioral-health-and-intellectual-disability-services.

Caleb Jackson is a counselor at the Behavioral Wellness Center at Girard, located at 8th and Girard in North Philadelphia. His passion outside of work is continuing to find ways to come up with programs that can help people facing mental health crises, he said.

“For me, it’s as if I just can’t turn off the drive to help others,” Jackson said. “The violence we’re seeing in Philadelphia is a community issue. I think violence is born out of low self-esteem and the inability to negotiate, and problem solve.  I’ve been working with a group of concerned citizens to try and come up with solutions. Together we are working to finalize a proposal we can present to city officials, with a goal of getting funding to offer a new and innovative series of workshops for youth.”

“Our concept will teach solutions to addressing, or better yet, avoiding violence,” Jackson continued. “It’s designed to be a learning project that will render positive outcomes at the end of the day. We think teaching young people to be self-determined, and self-regulated, will navigate them towards things that are positive. We won’t give up until we have our program up and running.”

Benita Tillman is part of the National Association On Mental Illness (NAMI) and she works closely with adults suffering from mental health issues. She also works with the Children Crisis Treatment Center in Philadelphia.

“I’m an activist,” Tillman said. “I dabble in a little bit of everything that’s positive. I’m trying to work on the gun violence problem in my community. I work on harm reduction related to the drug situation in my area and assisting people with mental health issues.”

“In my opinion, I think a lot of this violence is coming from unaddressed childhood trauma,”she added. “When you don’t get help after being in a traumatic situation, guess what? Life is going to address it for you. All the violence we’re witnessing, people using drugs, things of that nature, if you get to the beginning source of it all, usually, it reaches back to some kind of childhood trauma that was never addressed.”

“I know we can beat this violence that’s happening in Philadelphia,” Tillman concluded. “We may [not] stop it completely, but we can slow it down. I think it starts with addressing childhood traumas and getting help for people who clearly show signs of anger management needs and other mental health concerns.”