New conversation series explores the impact of gentrification in Philadelphia 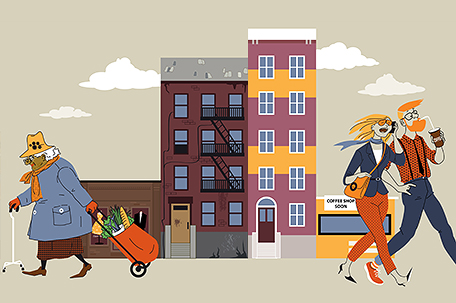 Amidst high rates of deep poverty and growing income inequality, like most major cities and older, mid-sized townships in the US, Philadelphia is rapidly gentrifying. Former businesses and institutional buildings are being converted, refitted and repurposed. The character and the racial and socio-economic makeup of some neighborhoods are changing entirely. It shows no sign of slowing down.

The liberal use of eminent domain, deed theft and other unscrupulous practices are coexisting alongside legitimate development projects, and are impacting the city’s African American community – from those experiencing deep poverty to its sizable middle class, most profoundly. And although it may seem to be a relatively modern phenomenon, it is just one manifestation of a movement towards displacement and replacement that has been aligning itself with changing demographics for decades.

The Henry Group — led by Rev. Dr. J. Henry Buck, Jr., senior pastor of Grace Baptist Church in the city’s Germantown section — hosted the first of several conversations tackling this complex topic recently at the Community College of Philadelphia’s Center for Business and Industry. The event was inspired in part by the book titled “How to Kill a City: Gentrification, Inequality, and the Fight for The Neighborhood” by P.E. Moskowitz.

Throughout history, ghettos for all ethnic groups have been strategically developed and maintained. They do not spring up by themselves and are as socially engineered as the 20th century’s suburbs. However, in the United States, African Americans have been affected the most from these practices. The recent trend of gentrification in major cities like Philadelphia is no exception.

Johnson spoke about the role of the Freedman’s Bank Act – enacted March 3, 1865 — which set the wheels of Black wealth creation into motion. The first Freedman’s Bank was established in Philadelphia that same year. However, by the 1870s, the bank failed due to the loan defaults of White businessmen, not the banking habits of the freedmen themselves.

The African American community has been fighting for wealth – which is closely tied to political power, class, land and property ownership — for generations, he said.

“We have become too complacent,” Johnson said.

The pattern of destructive reactions to Black success is both cyclical and strategic. Sometimes it is forceful, other times more subtle. However, it all has to be viewed in perspective, especially when it comes to gentrification.

“If we don’t root it in history properly, or analyze it as some analogous phenomenon, we say, ‘Wow, people just looked over here and thought it was nice, and now they’re coming and living here, with kale chips, dog grooming and hot yoga for everybody’ as opposed to saying, ‘Here we go again,’” Smith said.

Investment, disinvestment and reinvestment practices also come into play when it comes to gentrification.

“When we think about the disinvestment that happened in cities over time and investment that [originally] happened in the suburbs, it all goes back to race,” Dowdall said. “If we don’t talk about that, and if we don’t address that explicitly in policy, then we will never actually come up with effective solutions. Some people like to say, “a rising tide will raise all boats”, but you know some people are being drowned.”

The city has changed drastically over the past 40 years or so; 400k of its 1.5 million residents live at the poverty level, 200k of who live in deep poverty, Chenault Fattah said.

While conducting research for a documentary project she is currently working on, Chenault Fattah came across a clinical research program which studied gentrification’s effect on the mild cognitive impairment (MCI) outcomes of long-time residents in a historically African American neighborhood in Portland, Oregon.

When it comes to this condition, early intervention is important; adapting one’s lifestyle is part of this process. Regular socialization and exercise are also key components.

For the study’s participants, visiting the formerly segregated neighborhood where they grew up, raised children or built successful businesses in go through such a radical transformation, and yet not be part of that process, while helpful on the health outcome front, has been  painful at times, Chenault Fattah learned from the results of the two year-long program and interviews. Homes in the neighborhood – located 5 minutes away from the tech hub of Portland – now go for 1.2 million.

“ Collecting those recollections and the hurt, the anger and the resentment, being told that you are really no longer wanted in the community that you started is a part of the story that I’m telling in my documentary [based] in Portland,” she said. “But that same story is taking place here in Philadelphia, whether it’s in Northern Liberties, Queen Village, University City or Walnut Hill – all of these areas …those stories are being told throughout the country.”

Chenault Fattah also emphasized the key role that concerned citizens play in filling the void often left by mainstream media when it comes down to telling the complex and often nuanced story of the true impact gentrification is having on these communities.

“We have the technology and the resources here do so,” she said.

Some responses and solutions

Long term solutions include getting back to the enforcement of the Fair Housing Act and becoming proactive when it comes to selecting state attorneys general and others who are part of the local political infrastructure for the redress of grievances concerning discriminatory banking practices, Dowdall said.

It is also important for local government agencies to be ready to fill in where they can in terms of providing housing counseling and education about the predatory mortgage lending practices that are out there, as well as the programs available to keep you in your home if you currently own one, she added.

Washington spoke about the power of collectively supporting each other as African Americans to achieve the goal of home ownership.

“If you can take three families that have been renting for a decade, and collectively work together to invest in a property – what keeps us from doing that?” she asked. “What keeps us from having a block meeting so that we can talk about creating an investment group where once a month each family is putting in $50? Over the course of six years, eight years, ten years, we’re buying three of the houses on the block.”

It’s about harnessing the power that already exists in the community.

“I think that there’s something important about being unapologetic about, and challenging the notion that that gentrification is something that is happening to us,” Washington said. “The capitalism is something that’s happening to us. These are things that we have the power and the agency to resist and also to build anew…we really have to spend time investing in ourselves to create what is ours and to reclaim what is ours.”

The next conversation in the series will be hosted by the Masons and the Eastern Stars at the Masonic Temple, located on Broad Street across from City Hall on July 27, followed by one hosted by Local 1199C in August on a date TBA (to be announced). For more information, contact Rev. Buck at: (303) 594-7533 or at: [email protected].