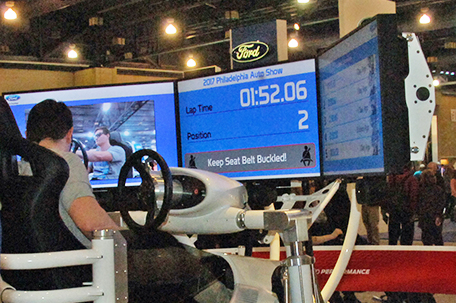 ABOVE PHOTO: Enjoying the Ford Sim2 Performance Simulator at the Philadelphia Auto Show. This was one of the popular activities, this and maintained long lines, throughout the weekend. (Photo: Solomon Williams)

From your dream car to the Batmobile, there’s something for everyone at the Philadelphia Auto Show.

As he sat in the driver’s seat of a new Cadillac XTS on at the Philadelphia Auto Show, Rodney Allen of West Philadelphia looked as if he had found his next car.

Allen, a longtime Cadillac aficionado, was looking at the CT-6 model of the classic American luxury car, but sitting in the XTS changed his mind. Getting the chance to see what’s out there is one of the reasons he’s been coming to the Auto Show for the last ten years, he said.

“I’ve been coming to the Auto Show since I was a kid, and now I’m bringing my kids here,” he said. “Here, I get a chance to check out the cars, see and feel them, and possibly test drive the car that I want.”

Darnell Walker of Wilmington, Tanya Scott of Sharon Hill, and Jodi Cheeks of Yeadon were at the Auto Show with a group of Girl Scouts that were part of a Boy Scouts/Girl Scouts discussion of cars and how they work.

While Scott and Cheeks were there for the first time, Walker is an Auto Show veteran, and says it has helped her be a more informed consumer when she goes into automobile showrooms. 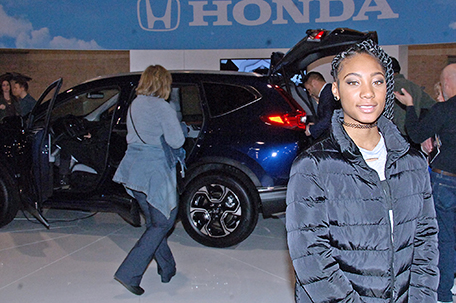 For the last 116 years, the Philadelphia Auto Show has brought cars and car enthusiasts together to see everything from exotic cars to the next family mini-van.

From Ferraris and Jaguars to the Batmobile, the Auto Show, which opened on Jan. 28, has something for everyone’s inner gear head. Taking up 700,000 square feet of floor space, cars of all kinds are there for all to see, said Kevin Mazzucola, Executive Director of the Automobile Dealers Association of Greater Philadelphia, organizers of the Auto Show.

Over 37,000 people came to the Pennsylvania Convention Center for the show’s first day. That’s no accident, Mazzucola said.

“This is one of the oldest auto shows in the country and it’s become a part of the fabric of the Philadelphia region,” he said. “This is a family event, and it gives families a chance to do something fun together.” 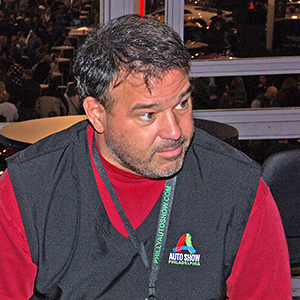 It is also an opportunity to see what’s new, what’s next, and what’s happening in the automobile world, Mazzucola said. Cars that won’t hit showroom floors until 2018 like the 2018 Chevrolet Equinox, the Hyundai Genesis G80, a newly redesigned Toyota Camry, the Volkswagen Atlas and the Mercedes-Benz GLA 45 are featured on the Auto Show floor, as are cars due out later this year like the Chevy Bolt EV, the Chrysler Pacifica Hybrid, and the Jeep Compass Trailhawk.

Exotic cars such as the Ferrari 599XX, the Karma Revero, the Aston Martin DB11 and the Jaguar E-Series Convertible are also on display.

But while it is a chance to see the car of your dreams, it is also a chance to shop for your next automobile, Mazzucola said.

Because you can’t buy a car at the Auto Show, you get a chance to see as many cars as you want without talking payments, or interest rates, he said.

“There are no dealers here,” he said. “Every automaker has a space on the floor, so it’s up to you to decide what you want to see. It gives you a chance to gather information about the cars and compare. Most of the people who are coming to the show are going to buy a car within the next 12 months. When they walk into the dealership, they’ll be better prepared.”

Part of that preparation is taking a test drive. In the Ride and Drive sections of the Auto Show, you can go outside and test drive a Mercedes-Benz, a Hyundai or even a Jeep. There is also a Camp Jeep section that will allow you (and your children) the chance to ride in a Jeep.

For those of you who are fans of The Fast and the Furious series of movies, cars you might see in that high-velocity film series are also a part of the Auto Show. The DUB Show Tour, hosted by “DUB” Magazine, contains 100,000 square feet of customized automobiles that will either give you an idea of what to do with your ride, or make you stare in disbelief.

Also, as part of the Hollywood Cars Display, the Batmobile, Ecto-1, the Cadillac hearse used in the movie Ghostbusters, the DeLorean from “Back to the Future,” and “Thor,” the Impala from the television show “Supernatural” are there for car fans to see.

The Philadelphia Auto Show is being held at the Pennsylvania Convention Center. Hours are 9 a.m. to 10 p.m. on Friday and Saturday and 9 a.m. to 6 p.m. on Sunday. Tickets are $14 for adults (age 13 and up), $7 for children and can be purchased at phillyautoshow.com. Children aged 6 and under don’t need a ticket.