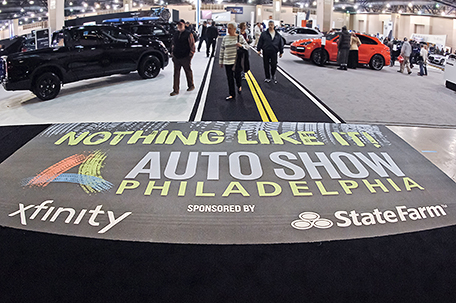 If you’re in the market for a new car, or even if you’re not, there’s something for everyone at this year’s Philadelphia Auto Show.

As she stood on the floor of the Pennsylvania Convention Center, Marille Thomas of Mt. Airy found herself looking at a nice new Acura.

She had been trying to get to the Philadelphia Auto Show for years, and her friend Steve Edwards, of North Philadelphia, brought her this year. While it was nice to see what was new in car technology, the practical things are most important, she said.

“I’m not a car aficionado, but I like them,” she said. “I like the gadgets, but what I look at mostly are practical things like trunk space.”

For many attendees, the Auto Show is also a chance to make buying your next car a much easier process, Edwards said. Because there are so many cars to choose from, and so much information available on each car, buyers can go in totally prepared, he said.

“It’s better than going to a car dealer because I can shop at my own pace,” Edwards said.

From now until Monday, the Philadelphia Auto Show is going on at the Pennsylvania Convention Center. About 250,000 people are expected to go through the 750,000 square feet of automotive exhibits that includes such things as a Toyota Sienna dedicated to the 45th anniversary of the celebrated cartoon character “Hello Kitty” and a Jeep painted in tribute to the late Los Angeles Laker Kobe Bryant.

Those are just some of the things that makes the Auto Show so special, said Kevin Mazzucola, executive director of the Auto Dealers Association of Greater Philadelphia, the show’s producers. There’s something for everyone, and because there’s no sales pressure, you can see all of it, he said.

“People want a place where they can take their time,” Mazzucola said. “Whatever you’re looking for, it’s here. About 47 percent of the visitors to the Auto Show buy a car within 12 months.”

Some of those cars will be available for test drives during the show, which is just one of the many interactive elements available at this year’s car show. You can spend some time at Camp Jeep, taking the aforementioned vehicles through an obstacle course. Ford and Hyundai offer chances to drive simulators for their cars.

But while the Auto Show, which is in its 119th year, gives visitors a chance to see the latest models, test drive some of them, and check out how some of your favorite celebrities, including Philadelphia Eagles quarterback Carson Wentz, have tricked out some of their favorite cars, it also gives you a chance to see the kinds of cars that you might see on television shows like “MTV Cribs” or in movies like “The Dark Knight.”

C.F. Charities, F.C. Kerbeck and McLaren Philadelphia have brought a display of Super Cars that is turning heads at this year’s show. The group of exotic cars with price tags to match include the Ferrari F40, the Bugatti Chiron, the Rolls-Royce Culliinan, the Lamborghini Huracan EVO and the Aston Martin DBS Superleggera.

But the show stopper in this group of cars you could picture in Bruce Wayne’s garage is the SSC Tuatara. This sleek automobile with a modified jet engine under the hood has broken speed records (it goes up to 300 miles per hour) and costs $3 million.

If you’re interested in the prospect of an electric Porsche, the Taycan, the German automobile maker’s first foray into the electric car market, is on display. Land Rover’s new Defender, it’s first new model in more than 20 years and Chevrolet’s C8 Corvette are also on display.

Older, classic cars are also on display at this year’s Auto Show. Thanks to the Antique Automobile Club of America, the Vintage Auto Museum of New Jersey and the Classic Auto Mall, cars including a 1953 Cadillac-62 Series Convertible, 1965 Porsche 911 and 1968 Lamborghini Muria will be on display.

Cars that have actually been in the movies are also on display for this year’s car show, Mazzucola said. The GT-40 that was used to shoot scenes from the Oscar-nominated film “Ford vs. Ferrari” joined Jesse Pinkman’s El Camino from “Breaking Bad,” the DeLorean from “Back to the Future,” the Gremlin from the movie “Wayne’s World” and the Shaggin’ Wagon from the movie “Dumb and Dumber” are among the cars featured in the “Hollywood Cars” section of the show, a section that’s only grown in popularity, Mazzucola said.

“We thought that we’d only be showing the Hollywood Cars for two or three years,” he said. “But people really seem to like them. So we continue to bring them back.”

Group tickets are also available and a portion from every ticket sold will go to the Auto Dealer’s Association’s CARing for Kids Foundation’s Driving Away The Cold program, which has given winter coats to 419,700 children in need since 2008.

Tickets can be purchased online at phillyautoshow.com.