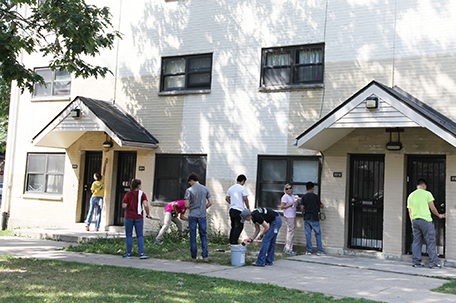 Close to 200 volunteers from 10 churches across the country will participate in painting and landscaping at six PHA developments including: Harrison Plaza, Johnson Homes, Oxford Village, Spring Garden Apartments, Westpark and Wilson Park. The volunteers’ work is estimated to save PHA nearly $100,000. Members of the building trades unions employed by PHA are also working with volunteers and will supervise their activities.

“Partnerships with groups such as World Changers are most welcome, especially during a time when financial resources are shrinking,” said PHA President and CEO Kelvin A. Jeremiah. “It is both a privilege and an opportunity to offer service and I heartily thank each of these volunteers.”

PHA Commissioner Rev. Bonnie Camarda, who also serves as the Director of Partnerships for the Salvation Army of Eastern Pennsylvania and Delaware, originated the partnership with World Changers.

“There is no better gift than when someone gives of themselves,” Camarda said. “The World Changers project provides students and adults a venue in which to live out their faith. Service shows people that you care, and that’s what PHA residents and our community will see.”

Salvation Army canteen trucks will provide water at the work sites throughout the week.

World Changers volunteers come from across the U.S. and pay their own way to Philadelphia. On average, participants pay $250 to take part in the week.