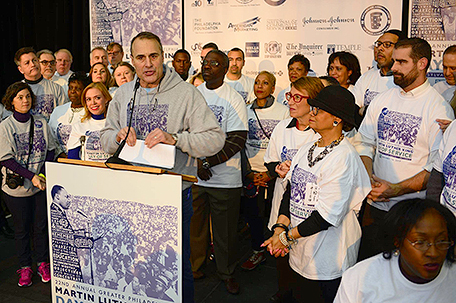 ABOVE PHOTO:  Founder and director of the Greater Philadelphia Martin Luther King Day of Service and president of Global Citizen Todd Bernstein (at podium) speaks to volunteers at last year’s event.

Organizers, sponsors, and community partners joined together today in a ceremony at Girard College to announce plans for the upcoming 23rd annual Greater Philadelphia Martin Luther King Day of Service. Girard College will serve as the region’s signature project site for the ninth successive year.

Founder and director Todd Bernstein, who is also president of Global Citizen, announced that a national record 150,000 volunteers are expected to participate in more than 1,800 community service projects throughout the region on the Monday, January 15 King federal holiday.

The national King Day of Service was created in 1994 through federal legislation co-authored by former Pennsylvania U.S. Senator Harris Wofford and Atlanta Congressman John Lewis, both veterans of the civil rights movement with Dr. King.

The 23rd annual Greater Philadelphia King Day of Service will highlight the 50th anniversary of Dr. King’s Poor People’s Campaign. “Today, fifty years after Dr. King launched the Poor People’s campaign, 60 percent more Americans– more than 41 million people– live in poverty,” said Bernstein. “If we are to solve this growing problem, we must embrace Dr. King’s living legacy by turning our concerns into collective action, not just on King Day, but everyday.”

Highlighting some 5,000 volunteers who are expected to serve in more than one hundred King Day of Service projects, workshops, and presentations at the Girard College signature project site, Philadelphia Mayor Jim Kenney will lead volunteers sorting and packing food, which will be distributed to people in-need through more than five hundred Philadelphia-area non-profit organizations. Volunteers will also be constructing grow light stands for cultivating seedlings, building pallet gardens- repurposed pallets to make vertical garden planters that can sustain plants, and creating compost bins. The signature project is sponsored by Target, United Way of Greater Philadelphia and Southern New Jersey, Share Food Program, Home Depot, Habitat for Humanity, Aramark and the Philadelphia Beverage Association.

The Cecil B. Moore Philadelphia Freedom Fighters, the group of men and women who demonstrated in the 1960’s for an end to the discriminatory admissions policies at Girard College, will lead a workshop, sharing their experiences in the civil rights movement.

“We are delighted to serve as the host for the nation’s largest MLK Day of Service for the ninth consecutive year,” said Ava Willis-Barksdale, interim president of Girard College. “As this year’s focus reflects on the 50th anniversary of Dr. King’s Poor People’s Campaign, which, in part, suggested that all people should have what they need to live, we are proud to participate.  We believe that Stephen Girard also had this concept in mind in his desire to provide education to children for whom it was not guaranteed.”

The King Day of Service will host its 7th annual Jobs and Opportunity Fair, presented by the Urban League of Philadelphia, i-Heart Media, and Comcast. Five hundred job seekers will be choosing among some twenty-five local employers and AmeriCorps national service programs. Participants must pre-register at mlkdayofservice.org for one of two sessions: 9-10:30 am and 10:30-noon. Target will be presenting job readiness advice.

Philadelphia Orchestra Director of Collaborative Learning, Michael Albaugh, attended the news conference to announce a continuing partnership with the Greater Philadelphia King Day of Service and Girard College.  The Orchestra will perform their 28th annual Martin Luther King, Jr. Tribute Concert, presented by PECO, at 1:30 pm in the Chapel, as the concluding King Day of Service event at Girard College. Free tickets will be available starting January 9 at noon at www.philorch.org. Patrons may also call Ticket Philadelphia at 215-893-1999 for tickets. Seating will be general admission and is first-come, first-served. Tickets do not guarantee entry and there is a limit of two per person. Doors will open at 1 pm.

Global Citizen, the United Way of Greater Philadelphia and Southern New Jersey, Points of Light, the Urban Affairs Coalition, Knight Foundation, The Philadelphia Foundation, PECO and Serve Philadelphia will present a Civic Engagement Expo that will provide information on the mission and work of dozens of local community organizations and opportunities to volunteer with these groups throughout the year.

Enon Tabernacle Baptist Church will present a Kid’s Carnival for children ages of 5-12 that will include story reading about Dr. King, I Have A Dream mobile-making, skits on Dr. King and civil rights, entertainment and more.  A King Day of Service coloring and activity book will be available for children to learn about Dr. King’s ideals of civil rights and civic responsibilities. The City Commissioner’s office will help future voters try out the first responsibility of citizenship in a demonstration of voting booths used in real elections.

Thousands of students throughout the area are participating in the tenth annual One King Day, One King Book project to encourage children to read, write, and discuss essays about Dr. King. Children have been submitting essays and will receive a King Day of Service certificate.

There will be projects at hundreds of schools in Philadelphia and throughout the region. Volunteers will beautify dozens of Philadelphia Parks and Recreation facilities.  The Philadelphia Fire Department is organizing neighborhood outreach projects on fire safety through all sixty-three fire stations.

Other King Day of Service volunteers will prepare food at homeless shelters and distribute meals to homebound seniors, organize health fairs and legal clinics, and perform plays about Dr. King and his principles of nonviolent social change and racial equality.

The news conference included the unveiling of a dramatic King Day of Service mural painted by students from six-area schools. Mural Arts Philadelphia led the annual project in which each school created a 5’ x 6’ canvas mural highlighting the 50th anniversary of the Poor People’s Campaign and the importance of the First Amendment.

After completing the murals in late December, the panels were attached to form a single, panoramic 35’ x 5’ mural. The mural will be on display January 15 at Girard College.  Participating schools and the Mural Arts Philadelphia artists who worked with the students are (left to right):

Updated information on service opportunities is available on Facebook– facebook.com/globalcitizen365 and Twitter– twitter.com/mlkdayofservice. The hashtag is #MLKDAY2018.

Organizations interested in becoming sponsors of the Greater Philadelphia King Day of Service and Global Citizen should contact Todd Bernstein at [email protected] or 215-242-9070.