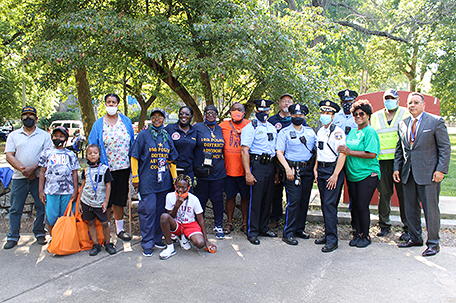 In spite of the COVID-19 pandemic and out of control gun violence, initiatives like National Night Out help organizations, residents and the police in neighborhoods like this one showcase ongoing efforts to make their communities safe.

Last week’s National Night Out event at Clara Muhammad Square in West Philadelphia demonstrated how a community could come together for a night of peace and calm and enjoy themselves as they take back a piece of the neighborhood.

“National Night Out is a national movement that has happened over the last 15 to 20 years,” said Dr. Annette Hampton of the Alpha CDC of Christian Stronghold Baptist Church. “The original concept was [conceived] because at that time, it was a lot of violence. So, the National Night Out’s theme was to get everybody to come out of their house and sit on their porch and be in their community to be in a safe environment for everyone.”

It was important have the event take place at the Clara Muhammad Square.

“It really is a beautiful place now,” Hampton said. “Several years ago, it was not, because there was a lot of drug activity over here. There was a lot of prostitution and all that kind of stuff. But [with] the efforts of the community leaders, they were able to get that element out of the park and return it back to the community, to the parents and the children.”

Through the partnership of community organizations like the Alpha CDC of Christian Stronghold Baptist Church and the 16th Police District, the years of their collaborative effect showed, cleaning up the park and the illegal activity that had a grip on the community. Now, the residents are seeing the beauty and potential of what a safe space in the community should be and look like.

Captain Brown of the 16th Police District explained why this partnership was so important.

We need to work together to make sure that this violence and all of this craziness and all of this group nonsense with our children coming down these streets need to stop.  And the only way to make that happen, is if we’re one force working together to do what needs to be done and that’s what this night is about.”

Some families were visiting the park for the first time since it has been cleaned up and felt empowered to bring their children and grandchildren and spoke about why they participated in the National Night Out and supported the efforts of the community and the police.

“I brought my grandkids out because of [the] positive attitudes for restoring our community and having faith in our city, and to try to make sure that our children are comfortable by playing and walking around in the park,” said area resident Belinda Mitchell. “So, we’re just doing what we have to do to make sure our youth take care [of] our future.”

“I came up because my sister invited me out here,” said Overbrook resident Lilly Miles. “I try to participate in things that will help better our community. Especially when it involves children and neighbors. This is the reason I’m out here. I wanted to support the neighborhood, so I brought my grandkids up. It’s wonderful — my granddaughter [is] excited. She wanted to go to the slides. She’s having a good time and it’s early. I’m sure a lot of people will be coming out here later.”

The positive response from community leaders and the residents is what makes the National Night Out initiative successful for everyone concerned.

National Night Out: A good time to talk