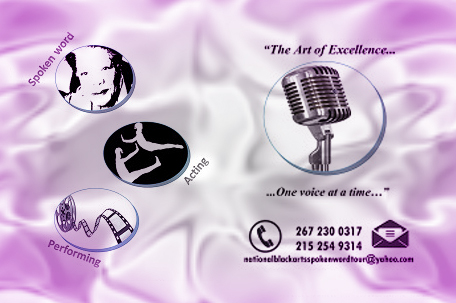 The National Black Authors Tour is scheduled to Celebrate 30 Years of Promoting Culture, Humanities and the Arts on Saturday, May 30, 2015 from 6PM to 9PM at the Big Blue Marble Bookstore located at 551 Carpenter Lane.

This evening of free events will highlight some of the well known, popular and new authors from Southeastern Pennsylvania and will also feature a pre-performance workshop for aspiring and experienced writers who want to elevate their skills, talents and abilities to another level.

Founded in 1985 at the Annual Black Writers Conference held at Medgar Evers College in Brooklyn, New York, The National Black Authors Tour has gained notoriety for promoting and publishing writers and expaninding their career paths into radio, television, film and the national theater touring circuit.  The evening will begin with a 6PM Workshop/Panel Discussion entilted “Rich of Almost Famous: How Writers Can Successfully Break into the Entertainment Business, Performing Arts Field, Broadcast Media and the Publishing Industry.”

It will be led by the Executive Director of the National Black Authors Tour, who is also the Editor-in-Chief of New Arts Productions Publications and Founder/Producer of Adelphia Company Records.

After the workshop there will be a special reading and booksigning by Kimmika Williams-Witherspoon, Neal Hall, Lois Moses, Bea Joyner and Aneesha Mohammad-Coley.

Kimmika Williams-Witherspoon is a nationally produced and critically acclaimed playwright, bestselling and awardwinning author whose works include “Don’t Call Me A Bitch”, “Culture Pop” and “Negro Kinship to the Park.”  She teaches at Temple University and has been honored with the Daimler Chrysler National Poetry Competition Award, Womens Peace and Freedom Award and the Pew Fellowship.

Neal Hall is a controversial and Award winning Author of  “Winter’s A ‘Coming Still” and “Where Do I Sit” (forthcoming).  He has won award from the Northwest, Great Southwest, Los Angeles, New England and New York Book Festivals.

Lois Moses has created works for stage productions, book publication, film, and spoken word recording.  She authored “No Just Another …Black Woman” and “Missing Pages (Women Behind the Glass Door)”, crafted the staged adaptation entitled “No More Blues Black/Woman” and starred in Chicago, Los Angeles and San Diego in the national touring production of “Sister Sonji” by Sonia Sanchez.

Bea Joyner hosts and produces a local talk show.  She is the author of the popular books “Don’t Need No Soaps, My Life is Soap Enough”  and “A Taste of Things to Come”.

Aneesha Mohammad-Coley is a Temple University graduate and author of “Body of Word: A Collection of Poetic Limbs.” She has been a contributing Writer for Jump Magazine and Urbanista Magazine.

More information about the organization and its accomplishments can be found at www.nationalblackauthorstour.com.

Anyone interested in a career as a writer, journalist, publisher, playwright,spoken word recording artist or performance poet should attend the workshop and reading by these awardwinning authors who are also outstanding media personalities.

It will definitely be worth your while, especially since its free and open to the public.