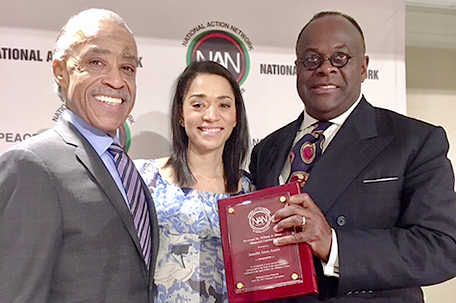 Makeba Green is a Millennial who believes in the National Action Network’s motto of “No Justice, No Peace.”

So, it wasn’t surprising that Green, a student at Montclair State University, was volunteering at NAN’s national convention at the Sheraton New York last month. With the theme of  “Everything Is At Stake,”, she felt it was important to be there.

In addition to her social media prowess, Green also brought information about the entrepreneurial venture she has launched, a communications and technology company that she currently operates in North and Central Jersey. The plan is to expand into the Delaware Valley and eventually to go global.

“I am here to bring the young perspective,” said 22-year old Green, who is studying communications and law. “If there are discussions about the police, our communities, health or economics we need to have the voices of those under 30 there. When I heard it advertised I knew that they needed me here.”

Darrell Morrison was one of the informal escort for several older convention attendees from the Philadelphia area. He saw the opportunity to become a volunteer for the NAN event online and as he prepares to graduate from Baruch College in New York with a degree in business administration and management, thought it would be a great networking opportunity.

“I believe that even though we see what’s going on in Washington, that there are still business opportunities and one can still be an activist,” said 28-year old Morrison. “Originally I was thinking of registering. But, as a student (funds) are limited. When I saw that there were volunteer opportunities, I knew I wanted to take advantage of that.” 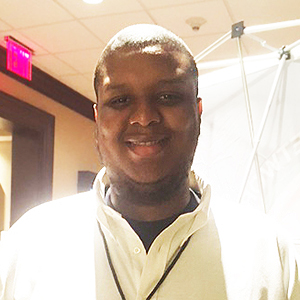 “This is an important conference, because it is the first time so many African-Americans from all over the country are coming together on this scale since the election of Trump,” Morrison continued. “I believe that if we work together, we can make it. That’s why I felt it was important to be a part of this today,” Morrison said.

For the Philadelphia native who identified herself as “Terrese from West Mount Airy,” it was important to her to talk to people like Morrison. She recently returned to the City and said that she came to the NAN conference because the times demand it.

“I think these are serious times,” she said. “I am here for all the days, staying at a hotel right across the street. I want to hear what Black folks must do, and are planning to do now. We have to realize that there are some who are trying to go back in time, and some who want our people barred from making progress.”

“This is the time to support persons like the Rev. Al Sharpton and others who are daring to take a stand and speak out,” Terrese continued. “You look at Donald Trump’s daughter, and she is traveling around speaking her mind. She is making money and getting attention. I think it’s time for our young people, like the ones you see volunteering here, to be supported. I think it’s great that some want to learn from their elders.”

Gwen Fields could not agree more. She said that she is seeing an increase in gang-related violence and more innocent young people being killed.

A better economic picture would go a long way with that, she said.

“The kids have nothing to look forward to, but trying to survive and stay alive with these conditions,” Fields said. “There’s nothing more important than jobs that pay. That really goes a long way in how you feel when you can pay your bills and provide for your family. When you work hard and don’t have the pay to show for it, it’s disheartening. That’s why you see them (the hotel staff) putting extra chairs in the ballroom. Jobs is what brought most of the people out.”