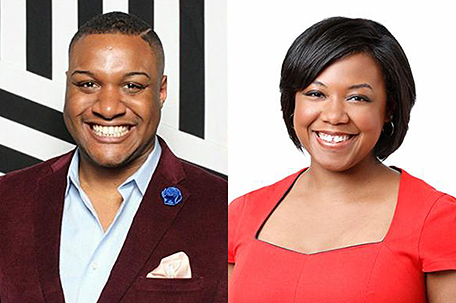 This award recognizes a Black print, broadcast, digital or photojournalist with less than five years of experience in the industry. Nominees must, through their work and service, display a commitment to NABJ’s goal of outstanding achievement and providing balanced coverage of the black community and society at large.

“It was extremely difficult to pick just one winner from this year’s group of excellent nominees, which is why we decided on co-winners,” said NABJ President Sarah Glover. “Candace and Ernest led the pack because they are equally impressive young journalists who exude the qualities that Michael Feeney was best known for. They both also have a passion for reporting on stories that have significance to underrepresented people.”

Smith, a segment producer at ABC News, was one of the only African- Americans on the campaign trail with Donald Trump, often enduring criticism from his supporters. She was also blocked as a pool reporter at a Trump event. Like her role model the late Gwen Ifill, whom she calls the “Mae Jemison of journalism,” Smith made it a point to connect with people on the campaign trail. She recently returned to Howard University to share her passion for journalism with students.

“What an honor it is to be recognized by such a distinguished group,” said Smith. “In an era where journalism is more important now than ever, it is humbling to be a part of a group of storytellers, fact-finders and truth-tellers like those at NABJ. I feel truly blessed.”

Owens was hired in January 2016 by Philadelphia Magazine to serve as editor of “G Philly,” an online LGBTQ channel of the PhillyMag.com website. Throughout 2016, he covered complaints from Black community members who alleged that several popular city Gayborhood bars were discriminating against them with dress codes that suggested covert racism and other passive-aggressive practices. His coverage resulted in legislation enacted by City officials to end the practice.

“I’m extremely elated and touched to be receiving this award from the most prestigious journalism association in the nation,” Owens said. “As an openly gay Black journalist further encouraged by this honor, I hope it will inspire other media professionals to better cover social issues that invoke the true intersectionality within the diaspora and beyond.”

Owens and Smith will be honored at the 2017 Salute to Excellence Awards on Aug. 12, 2017, during the NABJ Annual Convention and Career Fair in New Orleans, Louisiana.