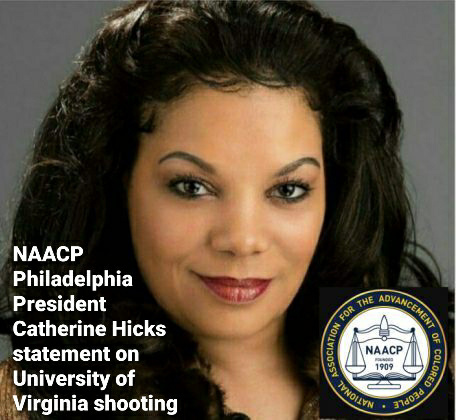 It is sad to again mourn young lives lost by gun violence while attending school.  The three football players shot and killed at the University of Virginia, became the 68th shooting deaths on school grounds. These deaths add to the 600 U.S. mass shootings this year that four or more people were shot and in most incidents killed.

Although the alleged gunman was arrested, we need solutions to stop the gun violence before it happens. Our schools, colleges and universities should have conflict resolution advocates to work with students to defuse the situation before it leads to another mass shooting and death of another young life. This scenario has unfortunately increased among our youth in cities across the Country. In response, The Philadelphia Branch NAACP has formed an Anti Gun Violence Task force that will research and identify root causes of conflicts with our youth and work to create strategies for prevention and solutions.

The Philadelphia Branch NAACP sends our heartfelt condolences and prayers to the families, students and friends of those lives lost and those affected by this tragedy.  We stand with those ready to be the change!