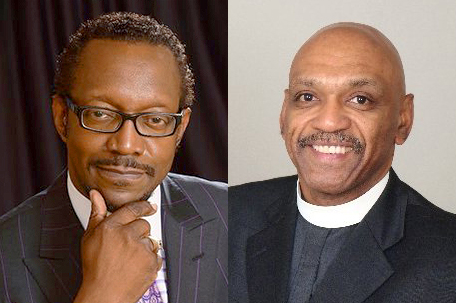 The urgency of this moment in the history of this city, Commonwealth and nation was emphasized throughout the evening.

During the forum, participants were invited to share information with those in attendance about their political priorities, the upcoming contest and the historical significance of the NAACP’s activism regarding the electoral process.

“America is at a crossroads; some of us went to sleep during the last election,” said Bishop J. Louis Felton, senior pastor of Mt. Airy Church of God in Christ and NAACP Philadelphia Chapter board member. “We have a drastic mistake – a disaster – in the White House…a lot of us are too quiet. You can’t get the thing changed by being quiet – you’ve got to speak up and you’ve got to vote up.

Rep. Brendan Boyle, who is seeking re-election to what is now the 2nd Congressional District following the redistricting map changes made earlier this year, outlined some of the most crucial issues he has worked on during his time in Congress, including gun violence, entitlement program protection and preserving hard fought for voting rights.

“We had the Voting Rights Act in the 1960s that was in existence for 50 years. Part of it was struck down by the Supreme Court several years ago,” he said. “I’m a co-sponsor of a bill which would restore the full Voting Rights Act. We need to go beyond that; we need to make it easier for people to vote and to have universal voter registration.”

Governor Tom Wolf, who is seeking re-election to a second term, highlighted some of his achievements since taking office over three years ago, including balancing the state budget, expanding Medicaid, addressing school funding shortfalls, criminal justice reform and the statewide opioid crisis. He admitted that while great progress has been made, there is still room for improvement.

Former Mayor Michael Nutter spoke to the attendees on behalf of Sen. Bob Casey, who is seeking a third term but was unable to attend the forum.

“There is no greater champion [for Pennsylvania] than Senator Bob Casey,” Nutter said.

Nutter also took time to remind those present about what is at stake on November 6, emphasizing that this is a political — not a popularity — contest.

“There is no person in elected office that put themselves in office…this is not about excitement. Every election is not going to be like 2008; we’re not going to re-elect the first Black president again,” he said. “It’s about hiring someone to do a job.”

Rev. Jay Broadnax, pastor of Mount Pisgah AME and president of the Black Clergy of Philadelphia and Vicinity, urged those present — most of who were likely to vote — to use their influence to encourage others who might need more persuading.

Commissioner Lisa Deeley, chairwoman of Philadelphia’s Board of City Commissioners — which oversees all elections in the city — spoke about voting as a marker of good citizenship, especially when our democratic republic is being tested and challenged.

“Non- participation in elections is the biggest threat to our democracy,” she said. “The best way for us to defend our democracy is to participate in it.”

Deeley also addressed the issue of voting rights for felons and ex-felons in Pennsylvania.

“The only people that cannot vote in Pennsylvania are incarcerated felons,” she said. “[However], if you are in jail and awaiting trial, you absolutely can vote.”

Ron Holt, who is the Republican candidate running to unseat State Sen. Art Haywood in the 4th District, was anxious to let voters know that there was an alternative choice in this year’s contest, spoke about his commitment to remaining accessible to constituents on a regular basis should he be elected – something that he feels is not being done well now.