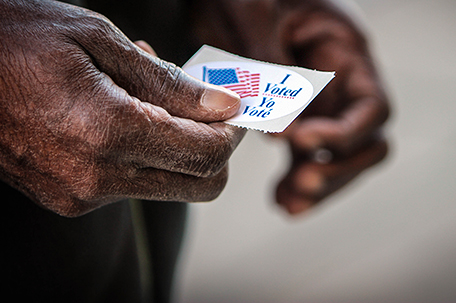 In his extensive investigation of Russian interference in the 2016 U.S. presidential election — which revealed that Russia had interfered “in a sweeping and systemic fashion” — Special Counsel Robert Mueller uncovered evidence which surprised many – that the African American community in particular was singled out and targeted by Russian-based troll farms and propaganda campaigns.

The Russians — not unlike the GOP — recognized the sheer power of this voting block and set out to disenfranchise it, largely through the use of digital and social media.

They are determined to do so again, employing even more sophisticated technology and real time tactics.

The NAACP recently held a teleconference featuring policymakers and thought leaders that addressed these challenges frankly and boldly.

Weaponization of social media via troll armies, bots and propaganda

Despite the exposure of lies, false narratives and other techniques highlighted in the Mueller report, 40% of the American public refuse to believe the attack on the 2016 election by the Russian government took place or could take place again, Nance told the 3,200 concerned citizens who participated in the conference call.

The greatest threats to the 2020 election — particularly for the African American community — are not only similar to those faced in 2016, they are worse.

“The nation is facing a peril that we’ve never had to deal with before,” he said.

What we have seen over the past three years is the transition from bots to trolls – real people with real agendas, some of them violent; this will only increase via the rise of virtual troll armies, Nance said. As it was in 2016, due to its powerful voting potential, the African American community is a highly valued target.

What concerned citizens can do

One of the audience members posed a question to the panel asking what could be done in response to this ongoing threat.

Malveaux also said that there needs to be a major re-education effort around the voting process in general, and that informed people need to encourage others within their families and communities to research and find the truth for themselves.

African Americans need to implement attempts to deprogram their neighbors, Nance said. They must be made aware of the insidious nature of conspiracy theories and other forms of disinformation; and while they might not always understand what is meant by “propaganda,” one thing they do understand is the concept of “lies.”

Another audience member on the call suggested that perhaps a fact checking troll army of our own to counteract the impact of this foreign disinformation campaign might be a solution. Nance advised against it.

“What we can do – individually and in groups – to combat trolls is to report them and expose them,” Nance said. “Don’t engage with them and validate their false arguments.”

Dr. Nicol Turner Lee agreed, stating that one of the reasons why the Russians were so successful in 2016 was that they exploited what they perceived as low self-esteem and cynicism within the African American community.

Knowledge is power, power Turner Lee said the community already possesses and can build upon.

“Raise your digital literacy and understanding to know that this goes beyond the static ‘here’s the narrative’… question that narrative, poke at it,” she said. “When people that you’re around begin to take you down that pathway of despair, bring them back. Remind them that their power still matters.”

Black voter turnout declined for the first time in 20 years in 2016, but there was a surge in the 2018 midterms, Contee said. There is momentum to build upon in 2020; however, different constituencies require different outreach messages.

“This is a way of protecting yourself” is the message that is getting through to Gen Z audience, as opposed to one that emphasizes sacrifices made by previous generations, she said.

One method that is also beginning to gain traction is mobile voting via secure phone apps, Contee added.

“Mobile voting is now legal in five states,” she said. “This can be used to ensure that those turned away at the polls votes are indeed counted.”

Another thing that Contee feels strongly about is follow through, especially where it comes to the wise use of technology to combat all attempts at voter disenfranchisement. Outrage alone is not action.

“We need to stop clutching our pearls, and start reaching for our keyboards,” she said.