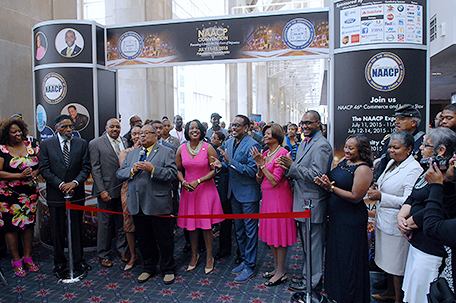 ABOVE PHOTO: Opening of the 2015 NAACP Convention at the PA Convention Center.

2015 Convention featured conversations about the criminal justice system, voting rights and the organization’s relevance in the 21st Century.

About 8,000 members of the national NAACP made their way to Philadelphia this week for the group’s annual convention.

And in a lot of ways, many of them symbolic, the group’s presence in the City of Brotherly Love made a lot of sense.

Since Philadelphia is where the nation first got its start, it made sense for the group to be here as the Confederate Flag was removed from the South Carolina statehouse. The decision to remove the flag was made by the South Carolina legislature in response to calls from the community to take it down in memory of the nine members of a Charleston, South Carolina church that were gunned down by a flag-waiving assailant.

At a news conference on Friday, NAACP President and CEO Cornell Williams Brooks praised the decision and gave special recognition to the South Carolina State Conference, which had called for a boycott due to the flag being on statehouse property 15 years ago. While in the end the flag’s removal was spurred by a tragedy, the State Conference can take pride in their contribution to the effort, he said.

“We stand with the members of that conference who worked day in and day out to make this happen,” he said.

By the time that the conference had ended on Thursday, the NAACP rewarded South Carolina for removing the flag by ending the organization’s boycott of the state.

On Sunday, the NAACP WIN (Women In NAACP) luncheon featured Baltimore State’s Attorney Marilyn Mosby. While the woman who is charged with prosecuting the police officers accused of killing Freddie Gray didn’t speak about the case itself, she talked why she got on her current path and why it’s important for the African American community to get involved in the Criminal Justice reform movement.

“There comes a time when you just have top say enough is enough,” she said.

President Obama spoke about the changes that need to be made in the Criminal Justice system in the areas of unjust sentencing, overcrowding, and the alarming percentage of people that are incarcerated in this country.

The mandatory sentencing guidelines that came with the crime bills of the 90s have led to a criminal justice system that’s led to some unsustainable costs, Obama said. These costs have led to a bipartisan effort to make changes that has brought together some pretty diverse groups, he said.

“This is a cause that’s bringing people in both houses of Congress together.” Obama said. “It’s created some unlikely bedfellows. You’ve got Van Jones and Newt Gingrich. You’ve got Americans for Tax Reform and the ACLU. You’ve got the NAACP and the Koch brothers. You’ve got to give them credit. There are states from Texas and South Carolina to California and Connecticut who have acted to reduce their prison populations over the last five years and seen their crime rates fall.”

But how did we get to where we are in terms of the criminal justice system? That answer came from former President Bill Clinton, who spoke at the conference’s last plenary session Wednesday morning.

In 1994, Clinton signed an omnibus Crime Bill that included many of the mandatory minimum sentences that created the current incarceration climate. As part of his speech on Wednesday, he issued a sort of mea culpa for that.

“I signed a bill that made the problem worse, and I want to admit it,” he said. “While a lot of these people were locked up under state law, the federal law set a trend. And we were wrong about that. The good news is, we had the biggest drop in crime in history,” Clinton said. “The bad news is we had a lot people who were locked up, who were minor actors, for way too long.”

The conference ended with a visit from Attorney Gen. Loretta Lynch, who spoke about the criminal justice system and voting rights.

Highlighted throughout the conference was America’s Journey For Justice, an 860-mile march from Selma, Alabama to Washington, D.C. for criminal justice and voting rights. That march begins on August 1.

President Obama should say yes to the NAACP Convention