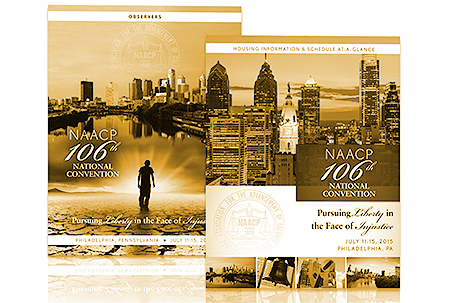 President Barack Obama to Address the convention on Tuesday, July 14

This year’s convention, held at the Pennsylvania Convention Center, will run from July 11 – July 15 under the theme “Pursuing Liberty in the Face of Injustice.”  The NAACP will focus on building a broad based agenda around voting rights, criminal justice reform, health equity, economic opportunity and education equality ahead of the 2016 presidential election.  Advanced registration for the convention closed in May and included full and one-day event registration for $25-$315. However, on-site registration will take place in the Philadelphia Convention Center starting Friday, July 10.  For more information, you can go to http://naacpconvention.org/ for scheduling and events during the convention.

This is the sixth time Philadelphia has held the NAACP convention since 1910. Recent host cities include Orlando, Florida and Las Vegas, Nevada. Next year the convention will be held in Cincinnati, Ohio.The 37th annual Academic, Cultural, Technological and Scientific Olympics (ACT-SO) competition will kick off in Philadelphia on July 9th  during the 106th NAACP Annual Convention.

On July 12th, students will gather for a star-studded Awards Ceremony at the Kimmel Center for the Performing Arts, hosted by Yara Shahidi and Marcus Scribner, stars of the ABC sitcom “black-ish.”

The annual NAACP-sponsored competition attracts hundreds of the nation’s most gifted young people. ACT-SO award winners can win up to $2,000 in scholarship money. More than 300,000 young people have participated in the program since its inception.

The four day competition begins with an opening ceremony that will feature a keynote address by actress Edwina Findley-Dickerson of the hit show ,“If Loving You is Wrong” airing on the OWN Network.

“We are honored to welcome President Obama back to our NAACP national convention,” stated NAACP Chairman Roslyn M. Brock. “Our members are looking forward to President Obama delivering a powerful message that reinforces our commitment to being champions for civil and human rights in the 21st century.”

This is the second time President Obama will address the NAACP’s National Convention as President of the United States. The NAACP values the opportunity to hear from elected officials, government leaders and candidates for public office.

“President Barack Obama, having spoken eloquently of grace to a grieving nation in a moment of crisis in Charleston, will now address the social and economic challenges of our time in the hometown of American freedom – Philadelphia, stated NAACP President and CEO Cornell William Brooks.  Thousands of NAACP leaders, delegates, activists, youths, and supporters will welcome him to the 106th Convention of the NAACP in a moment in which his voice and our voices so desperately need to be heard. President Obama has been on the forefront of transformative change from civil rights to human rights over his term and in recent days.  We in the nation eagerly anticipate his vision and plans for the difficult work ahead.