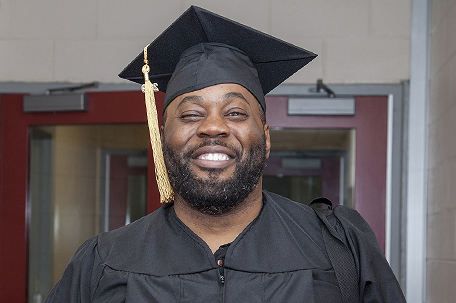 While a student at Community College of Philadelphia, Kevin Ceasar was the class funny man, described by various classmates as pleasant and willing to help out with tutoring or homework.

As graduation day approached, word began to spread that Ceasar had an attention-grabbing day job.

He was WUSL Power 99 AM’s MuthaKnows, a fixture and fan favorite on the popular “Rise and Grind Morning Show” with Mikey Dredd and Mina SayWhat. There, Mutha dishes out delicious gossip each morning in a popular segment called “The Tea.”

When his morning job ended, Mutha was just another college student in Philadelphia working toward a degree.

There was homework, classwork, lines to memorize, papers to write, and many, many difficult tests to take. It wasn’t easy, he said. Plus, he had to pay his own way through college. No financial aid.

MuthaKnows talked often about his quest, at the age of 40, to return to college, and get the degree that had eluded him two decades earlier during his first attempt as a college student.

He spoke often of the importance of education. He shared his educational pursuits and, in recent weeks, his triumph: He was about to become a college graduate. Fans were elated.

On May 4, 2019, Kevin Ceasar aka MuthaKnows earned an associate degree in mass media, becoming the first in his family to complete college.

Dozens of well-wishers, including his mom and dad, were there to watch him cross the stage of The Liacouras Center at CCP’s 53rd commencement.

There were 1,881 candidates for graduation in all, with U.S. Rep. Dwight Evans (D – 3rd Dist.), a CCP alumnus, serving as the commencement speaker.

What was going through MuthaKnows’ mind as he crossed the stage, at age 43, in his black cap with tassel, and his gown, piped in gold?

He thought to himself: “It’s showtime! This is the big day you’ve been waiting for. Now walk down the aisle with your head held high. This is what Black excellence looks like.”