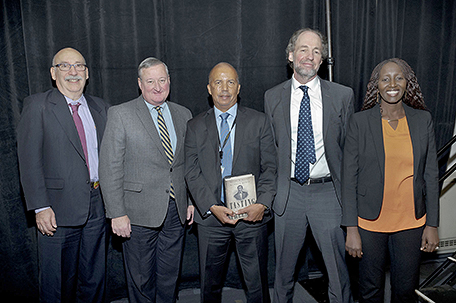 African Americans’ centuries-long battle for freedom has not been lost on Philadelphia Mayor Jim Kenney, an Irish Catholic who prides himself on knowing his city’s history.

On Tuesday, while praising the bravery and sacrifices of these past freedom fighters, Kenney made an observation that made the room fall silent:  “In the end, this country will be saved again by African Americans November 8,” the Democratic mayor told the crowd.

About 150 people gathered to honor one of those 19th century activists who Kenney loves to discuss when addressing the city’s history. Octavius V. Catto, an African American educator, organizer and civil rights activist, was only 32 years old when he was murdered on Election Day in Philadelphia on October 10, 1871. African Americans males had been able to vote that day, after the 15th Amendment to the Constitution restored their vote.

Though it has been 14 decades since Catto’s death, Kenney keeps an etching of him over his favorite work space in his office.  “I want him looking over my shoulder to remind me what my responsibility is to the children and to all of the people of Philadelphia,” Kenney said.

The room was packed, with latecomers turned away, as a panel delved into Catto’s life, and its lasting impact on the city today. “Black history was systematically ripped from the pages of history on purpose,” Kenney said. “I’m a white kid growing up in South Philly in the 60’s and 70’s. Do you think anybody is going to tell me about African America history? No, because they thought it wasn’t in anybody’s best interest to tell me.”

The City plans to rectify that oversight this spring with the unveiling of a memorial statue dedicated to Catto that will be placed on the southwest apron of City Hall – the first African American individual so honored. The Mayor’s decade-long push for the memorial will ensure that the conversation Catto started so long ago will be continued. 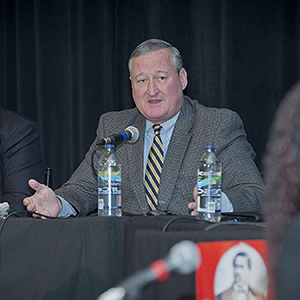 Mayor Kenney was joined on the panel by  Dr. Donald Guy Generals, president of the College; and two of Catto’s most prominent biographers, Daniel R. Biddle and Murray Dubin, authors of Tasting Freedom: Octavius Catto and the Battle for Equality in Civil War America. Aminata Sy, a graduate of the College who now attends the University of Pennsylvania, moderated the discussion into how the past informs the present: Biddle and Dubin shared stories of Catto’s bravery and achievements while Dr. Generals and Kenney reflected on how far we’ve come, and the distance yet to go.

Both Kenney and Dr. Generals believe Catto would be disappointed that the nation has not made public education its top priority. The mayor said he is working to provide access to quality education for all with the establishment of pre-K and community schools.

Biddle recounted how African Americans, under threat of their lives, pushed through expansion of equal rights, none of which was more important than the right to vote, because “all the rhetoric turned from mere words to political power,” Biddle said, “and the people who lost power in that equation weren’t going to give up without a fight.”

Even today, in an incendiary election year said, states such as Ohio have attempted to enforce laws that strip away the right to vote for African Americans Dr. Generals said. The president made a direct appeal to the young people in the audience to register and vote as a way to pursue social justice, reminding them that it was the leadership of youth – Martin Luther King, Medgar Evers, Malcolm X, and O.V. Catto — that stung the collective consciousness for civil rights in America. And many young people flocked to the online registration table.

“You can’t underestimate the importance of getting out to vote,” Dr. Generals said. “O.V. Catto lost his life for that very thing. Democracy is born out of the struggle of African Americans, and the major part of it happened in Philadelphia.”