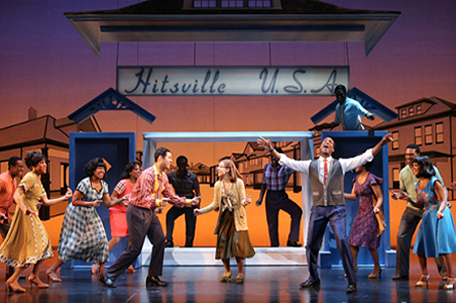 Motown the Musical is finally making a stop in Philadelphia, and I can’t contain my excitement!  Although I was not even a glimmer in my mother’s eye when Motown was created by innovator Berry Gordy, I have rocked, jammed, and belted out many a tune generated in Detroit.  From Smokey Robinson and the Miracles to the one and only Stevie Wonder, there’s something for everyone in the musical.  I recently had the pleasure of talking to Elijah Ahmad Lewis about his roles, which include Levi Stubbs of the Four Tops and Stevie Wonder, in the upcoming event to hit the Kimmel Center’s Academy of Music January 8th-18th, 2015.

KA: Where are you from?

EAL: I was born in Newark, NJ raised in New Jersey and in Harlem.

KA: How did you find out about ‘Motown’?

EAL: The director Charles Randolph-Wright, he came to one of my performances years ago.  He directed a movie that I was in and he came and he told me I should audition and I came. (Laughs)

KA: What are your roles in the musical? 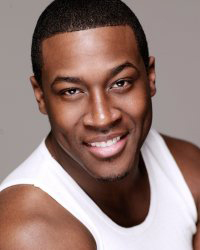 EAL: I play Levi Stubbs, I also play a Miracle, Bobby in the Miracles, I’m one of the Pips [of Gladys Knight and the Pips], and I’m a backup singer for Diana Ross, and I’m Stevie Wonder.

KA: Taking on these iconic figures in music, especially Stevie Wonder must have been somewhat of a daunting task, so how did you prepare for the roles?

EAL: I did a lot of rigid research, a lot of video research and just speaking with Mr. Gordy and [determining] the personal preferences that he had.  Just knowing his inflections and the way he reacts to certain things, how he sings, the voice style he uses, the voice placement, you know things of that nature.

KA: So would you consider yourself an actor or a singer first?

EAL: Well I started singing first, in the church, since I would say probably around ten.  I was a drummer first, which is funny because Stevie Wonder was a drummer first.  And then I moved into acting and dancing and the performance side.

KA: What advice would you give to aspiring actors or singers who want to navigate this difficult career?

EAL: I would definitely first say to study your craft.  Whatever you’re in whether it be dance, singing, or acting, in front of the scenes or behind the scenes, just study your craft.  Know the ins and outs, know what you bring to it and perfect it and always train and never stop training—to have vocal coaches, acting coaches and different acting workshops you go to.  This is a very competitive industry, and as long as you believe what you have you know practice makes perfect, keep at it every day and keep perfecting what you have I think you’ll be better off that way.

KA: What do you want people to take away from not only your performance, but from “Motown the Musical” as a whole?

EAL: Motown the Musical is an awesome story about how it was built and the untold love story between Diana Ross and Berry Gordy.  I would want people to take away you know whatever it is that you believe in there is a way for your dream to come true.  As long as you believe in what you have as long as you trust God, and as long as you truly love it, everything else should fall into place.  It’s the story of overcoming what people may say you can and can’t do; believing in yourself and put your full force behind it and it will come true.

KA: What are some of your favorite things about being a part of this cast?

EAL: It’s pretty amazing, we are definitely a family.  A lot of people would not even know half of the stuff that goes on backstage. (Laughs)  Being with each other every day and every night, on and off stage it’s truly wonderful.  Two of my favorite moments would have to be “Dancing in the Streets” which is sang by our beautiful Patrice Covington who plays Martha Reeves, it’s a fun number where just about everyone in the cast is on the stage at the same time.  And my other favorite would of course be Stevie Wonder’s “Signed, Sealed, Delivered,” a very iconic song, one of my favorites.

KA: Do you have maybe two or three favorite Motown artists?

EAL: Stevie Wonder would definitely be one, the Jackson Five, Smokey Robinson and Marvin Gaye, you know, it would just be all collectively there at once. (Laughs) But I would say number one Stevie Wonder.

KA: Have any of the artists you play come to see the performance, and what is that experience like?

EAL: The highlight of this tour was in Chicago Smokey Robinson came to our opening and also in Detroit a lot of Motown executives and artists came I’m including Martha Reeves and some of the Vandellas.  Stevie Wonder was actually there and it was pretty amazing, the song that I close out with is “I Wish” I got to do a duet with Stevie Wonder so that was an amazing epic moment so that was one of my most memorable moments thus far.

KA: Where else are you guys going?

EAL: It’s a full national tour so we were in Chicago and Cleveland, Detroit, St. Louis, we’re in Minneapolis now,  next is Philly, Pittsburgh, Boston, so we’re making our way around.

KA: Have you ever been to Philly before and if so, when you have some down time what do you plan to do here?

EAL: I have been to Philly, I haven’t been there recently, but there are a couple of spots I want to check out once I get there.  But Philadelphia is a wonderful place, I can’t wait to get there and see what the show does there.

With choreography by Patricia Wilcox and guidance from Mr. Motown himself—Berry Gordy, this show will be a soulful way to bring in the New Year for old heads and youngins alike.  The slogan is definitely accurate in every way: the beat of a generation, the soul of a nation!