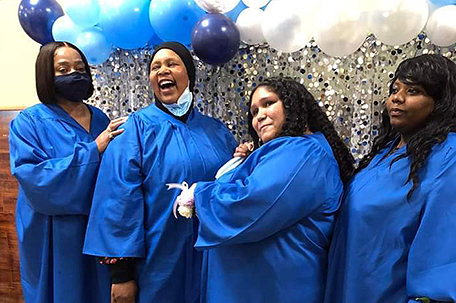 ABOVE PHOTO: A group shot of the graduates as they share a laugh. (Photos courtesy of Napoleon Kingcade)

In 2014, with a grant from the Philadelphia Prison System, Dorothy Johnson-Speight — founder of the advocacy organization Mothers in Charge — started a 10-week job training program called “Women Working for a Change”  to provide job training for formerly incarcerated women.

Each participant must set goals in order to pursue a better life.

They must also complete the program, which contains a life-skills curriculum focused on trauma issues building self-esteem, and the development of critical thinking.

Once they complete their training, most of the women obtain employment in the working world.

For these proud mothers, this 10-week training program not only keeps them out of trouble, but also gives them a fresh start in life.

About a month ago, seven members of Women Working for a Change were honored during the annual graduation ceremony, held this year at the Sister Clara Muhammad School, located at 48th & Wyalusing Avenue in West Philadelphia.

Johnson-Speight kicked off the ceremony by talking about how for eight years her training program has helped so many graduates. Among those who spoke at the graduation was Councilmember Kenyatta Johnson, who shared his own personal story of how he spent his young life as a troubled teenager and how his incarcerated mother helped him turn his life around.

“I remember going to the House of Corrections as a kid to go see my mom,”  Johnson said. “I remember going to Muncy Prison to see my mom before she came home. Well, when she came back home, she got her life together. She had a good talk with me about my own life. What she said to me made me change my life. If it wasn’t for my mom, I wouldn’t be a former State Representative and the first African-American to run the 2nd District in South Philadelphia.” Johnson shared some advice with this year’s graduates.

“One thing I learned as a young kid, [is that] your attitude will determine the outcome in your life,” he said. “Oftentimes, life isn’t fair, [even] when you are doing the right thing. I say this because life can throw you a curveball. That’s why I encourage all the graduates to keep up the good work. If you fall down, just get back up. No matter how many times you fall down, always get back up. At the age of 16, there were some people who saw something in me that I didn’t see in myself.”

The highlight of the graduation ceremony was an outstanding portrayal of Harriet Tubman by actor Jacqui Sorrell, who is a member of Mothers in Charge.

Sorrell played the iconic woman who captivated history by leading slaves to freedom through the Underground Railroad. During her solo performance, Sorrell led the audience through Tubman’s entire journey. When her performance concluded, Sorrell received a standing ovation.

In addition to Sorrell’s performance, there was some great singing by local recording artist and songwriter Ashli Allen, who sang Andra Day’s powerful song, “Rise Up,” with the same emotion that gives a person the inspiration to get through life. The song’s lyrics speak about a person’s desire to achieve their goals and overcome anything in this world. It was a perfect choice for the program’s graduates.

Through Mothers in Charge and its Women Working For a Change program, many of the women’s scars have been lifted, and much of their pain has been transformed into positive energy. For these women, what has been lost is now restored. The training program has also made them better mothers. By having an action plan in place, each woman can now achieve their goals and move in a positive direction.

Mothers in Charge is a violence prevention, educational and intervention-based organization that advocates for and supports mothers and families affected by senseless crime across the city.  For more information about their programs and services, call (215) 228-1718, or visit: www.mothersincharge.org.