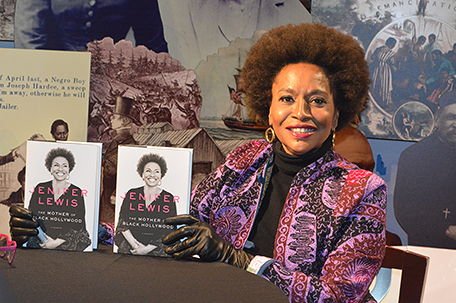 ABOVE PHOTO:  Jenifer Lewis makes an unforgetable visit at AAMP to talk about her new memoir “The Mother of Black Hollywood.”  (Photo: K-Len Anderson)

“I knew the world was bigger — I wanted to do something great, so I pursued it.” – Jenifer Lewis

Damned if she didn’t!

Jenifer Lewis discussed her new memoir “The Mother of Black Hollywood” before coming to the city for the presentation and book signing last Thursday, November 16 at the African American Museum of Philadelphia (AAMP).

If there is any Black person unfamiliar with Jenifer Lewis and her extensive and versatile line of work — climb out from under your boulder dwelling and learn something. Hearing her speak, reading her book, and watching her entertain the audience here in the city was nothing short of awe-inspiring, she is truly an enduring spirit with a love for people and a knack for professionalism.

Fortunate enough to be a lasting star in show business, Lewis has 350 episodic shows, concerts all over the world, numerous Broadway and cabaret appearances, and 68 movies on her resume–starting a mere 11 days after graduating from Webster University — and she is not done yet! Her career has entertained, overjoyed, and inspired tons of Black people to pursue their own dreams and/or seek professional help for their mental health, as she is a fierce advocate of doing so. 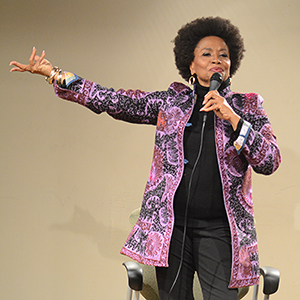 One takeaway she wants folks to remember is that she “lived out loud.” It is impossible for Lewis to bite her tongue, and as that typically goes, she is either revered or shunned for it. A topic she is adamant about using her platform for is mental health awareness in the Black community, as she was diagnosed with bipolar disorder at age 33.

“We are as well as our secrets,” she said. “Guys, if you got something going on, go get some help, please, please. And if you know somebody that’s in trouble— it don’t got to be bipolar, it’s somebody [touching] you in an inappropriate way and you’re eating yourself to death trying to make yourself unattractive so nobody else’ll touch you…I know a thing or two.”

Lewis has the vitality of an intense and loudmouthed, tell-it-like-it-is, over the top auntie and the strong spirit, tough love, and gentle nature of grandma making the Queen the only one who could don the term, ‘Mother of Black Hollywood.’ She also celebrates millennials and youth and is not afraid to praise and offer constructive criticism in the same breath.

“I want them to take away gratitude for those who came before them, we left them a mess to clean up. I would inspire them to keep going despite their challenges, find your passion and focus on it every day instead of taking selfies. Stand up and stay up and resist [the forces against you].”

Her appearance at AAMP was far too short. Philadelphians could’ve sat for hours as she put the audience in stitches time and again. She was a riot and a firecracker. To hear her wisdom was nothing short of extraordinary and honorable. This woman is so damn lovable!

Mother Jenifer, we all love it too, thank you for being downright honest and perfectly human. Her book is a page-turner and ‘laugh out loud’ hilarious, offering wisdom through experience. Jenifer Lewis’ “The Mother of Black Hollywood” is a perfect gift for the holiday season.