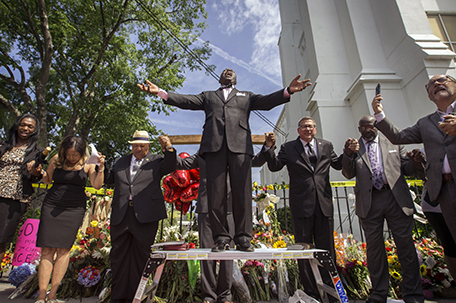 ABOVE PHOTO:  Dr. Dexter Easley preaches to a crowd gathered outside the Emanuel AME Church during a prayer service by the National Clergy Council, Saturday, June 20, 2015  in Charleston, S.C. Clergy from around the country led prayers and words of hope to the people in attendance. (AP Photo/Stephen B. Morton)

The Mother Emanuel Nine are the subject of a powerful production, “Mother Emanuel: An American Musical Play,” being hosted by Bethel AME Church of Ardmore, Sunday, February 12.  The musical is being presented in two performances, during the 10:30AM worship service and 4:00PM at the church located at 163 Sheldon Lane, Ardmore.

Written by Rajendra Ramoon Maharaj, Adam Mace and Christian Lee Branch, the play won the 2016 New York International Fringe Festival Award for “Overall Excellence For A Musical” and was selected to be part of the Fringe Encore Series. The production has received excellent reviews from the New York Times and Washington Post among other media. Maharaj, guest artistic director of Philadelphia’s New Freedom Theatre, also directs the play.

The immensely-talented cast of four that includes Branch, Marquis Gibson, Lauren Shaye and Nicole Stacie — portrays the nine martyred victims in what is a celebration of their remarkable lives.  Although the play is set during the Bible study, it gives the audience some insight as to who the nine souls were through flashbacks that reveal their personal stories, strong faith, hopes and dreams. The gospel-infused musical also provides the audience with a rousing depiction of the experience of the African Methodist Episcopal Church and invites the audience to feel the spirit of the moment.

“We are happy to host the Mother Emanuel musical production which invites us into the lives and experiences of the nine souls lost in the horrific massacre that took place at Mother Emanuel AME Church in Charleston, South Carolina in June, 2015,” said Rev. Carolyn C. Cavaness, pastor of Bethel AME Church. “We are very honored that the production desires to share the musical, which is full of great singing and testimony, inviting us into the lives of those departed.”

In spite of the tragedy, the play is a heartfelt testament to the joy of life and the strength of a community of faith. While it is fitting that the play is being presented during Black History Month, it depicts a solemn part of American history that must be taught now and to future generations, like the four little Black girls who were brutally murdered while attending Sunday School when members of the Ku Klux Klan bombed the 16th Street Baptist Church in Birmingham, Alabama in 1963.  Their story and that of the Mother Emanuel Nine must never be forgotten.   It is fitting that God’s judgment has come down on the demonic perpetrator who was recently sentenced to death for his evil deeds.

This is a production you don’t want to miss! Suggested donation for adults is $20. A portion of the donations is being contributed to support organizations that have been founded as a result of the senseless act of violence. Children are welcome with parental guidance strongly encouraged.  Tickets may be purchased at the door for both performances.  For group sales and more information call Bethel AME at (610) 642-8966 or reserve your ticket online at https://motheremanuel4pm.eventbrite.com.

Why you can’t kill the spirit of Mother Emanuel