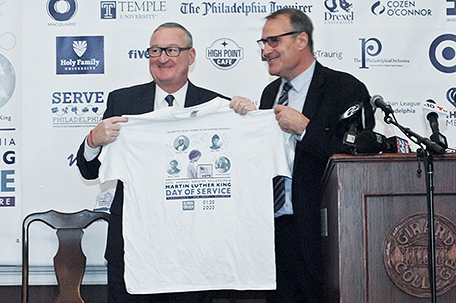 Organizers, sponsors, and community partners joined together in a ceremony at Girard College on January 8 to announce plans for the upcoming 25th annual Greater Philadelphia Martin Luther King Day of Service. Girard College will serve as the region’s signature project site for the eleventh successive year.

Founder and director Todd Bernstein, who is also president of Global Citizen, announced that a national record of more than 150,000 volunteers are expected to participate in more than 1,800 community service projects throughout the region on Monday, January 20, the King federal holiday.

The national King Day of Service was created in 1994 through federal legislation co-authored by the former Pennsylvania U.S. Senator Harris Wofford — who died on January 21, 2019 — and Georgia Congressman John Lewis, both veterans of the Civil Rights Movement with Dr. King.

The 25th annual Greater Philadelphia King Day of Service will focus on “Voting Rights Then & Now — the 100th Anniversary of the 19th Amendment, the Role of Black Women in the Suffrage Movement & the importance of being counted in the 2020 U.S. Census.”

Highlighting some 5,000 volunteers alone expected at the Girard College signature site, who are expected to serve in more than one hundred projects, workshops, and presentations, Gov. Tom Wolf, Mayor Jim Kenney, and U.S. Sen. Bob Casey will lead volunteers building wooden boxes for storing US Census “Commit to Count Cards”  for Census champions and action leadersto take with them to community outreach events. The boxes will display key information around voting and the Census.

During the press conference, Mayor Kenney presented the 22nd annual Harris Wofford Active Citizenship Award to the Urban Affairs Coalition for their “longtime support of the Greater Philadelphia Martin Luther King Day of Service and tireless commitment to improving the quality of life in the Philadelphia-area.”

The event also included the unveiling of a dramatic King Day of Service mural painted by students from six-area schools. Mural Arts Philadelphia led the annual project in which each school created a 5’ x 6’ canvas mural highlighting Voting Rights Then & Now.

After completing the murals in late December, the panels were attached to form a single, panoramic 36’ x 5’ mural. The mural will be on display January 20 at Girard College.