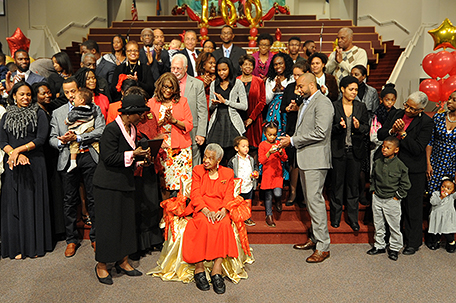 January 2017 not only marked a brand-new year for us all, but a century milestone for Mrs. Myrtle A. R. Bobb.  “Mom Bobb” celebrated her 100th birthday with a phenomenal commemoration which included her devoted New Covenant Church family, plus relatives and friends from as far away as Barbados, South America, Austria and locations across the United States.  Mrs. Bobb is the mother of Rev. Dr. Hyacinth Bobb Grannum and the mother-in-law of Bishop C. Milton Grannum, founding pastors of New Covenant Church of Philadelphia. The 100th birthday celebration honored Mrs. Bobb’s life, love and contributions to education, music and spreading the Gospel of Jesus Christ.

As various citations and memories were shared, her remarkable life story unfolded:  She was born in January 1917, in the middle of World War I, in Guyana, South America (formerly British Guiana). She attended school in Guyana and began her teaching career there. In 1941, she married the late Rev. Dr. Douglas C. J. Bobb, a Methodist minister. While raising seven children, she continued teaching, assisted in the ministry, played piano, and helped the sick and needy in the various parishes. In the 1950s, she also supported her husband who served on British Guiana’s Legislative Council. 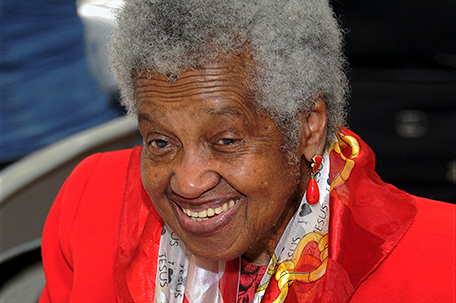 It was in 1964, that the Bobbs moved to Philadelphia, Pennsylvania, where Rev. Bobb served at Memorial Temple, an urban mission in North Philadelphia. Mrs. Bobb assisted with many aspects of these ministries. In addition, she, along with four of her daughters, enrolled at the newly-founded Community College of Philadelphia (CCP).  In 1967, Mrs. Bobb and her daughter, Hyacinth, were members of the college’s first graduating class. Myrtle Bobb remains the oldest-surviving member of that historic group.

Always a scholar, Mrs. Bobb earned both a BS and MS in Education at Temple University. She taught at Ferguson Elementary School and Stoddart Fleisher Junior High School and was instrumental in establishing one of the first “Get Set” pre-school programs in Philadelphia’s Germantown section.

After her husband’s death in 1990, Mrs. Bobb joined New Covenant Church of Philadelphia, where she remains one of its most-loved, cherished, remarkable role models. At 100 years young, Mom Bobb is going strong – enjoying her six children, 10 grandchildren and five great-grandchildren, in addition to hundreds more who lovingly call her “Mom”. A sunny smile always illuminates her face as she blesses well-wishers with her wit, wisdom, heartfelt prayers, singing and her spontaneous praise dancing; thus, it was so appropriate that her granddaughter Gillian Grannum — who delivered the Sunday service message, for Mom Bobb’s birthday — entitled it, “I Hope You Dance.”

“God is so good to me,” Mom Bobb softly whispered. “And I thank Him for my family and all the beautiful, lovely people in my life.”