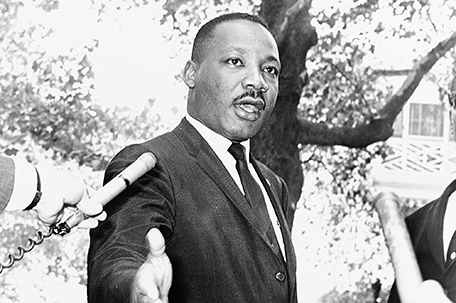 The events are sponsored by the Citizens Charitable Foundation

The African American Museum in Philadelphia and Citizens Bank invite audiences to join us for a full weekend of enriching, fun, inspirational, family-friendly activities celebrating the life and legacy of Dr. Martin Luther King, Jr.

Throughout the weekend and during Monday’s MLK Day Celebration, AAMP will use our 2019 theme “Media and the Movement” to explore the relationship between news media, and current and historic social justice movements in the United States. Guests can also explore our core exhibition Audacious Freedom: African Americans in Philadelphia, along with two special photography exhibitions, Cotton: The Soft, Dangerous Beauty of the Past, and Photographic Memory.

Thanks to the generosity of Citizens Bank, museum admission will be reduced to $2 for all guests on Saturday, Sunday and Monday.

Films at AAMP: Whose Streets?

Told by the activists and leaders who live and breathe this movement for justice, Whose Streets? is an unflinching look at the Ferguson uprising. As the national guard descends on Ferguson with military grade weaponry, these young community members become the torchbearers of a new resistance. Whose Streets? is a powerful battle cry from a generation fighting, not for their civil rights, but for the right to live.

Join AAMP for our MLK Day of Service as we prepare care packages for families staying at the Woodstock Family Center in North Philadelphia. Together, we will package winter essentials, create no-sew fleece blankets and pillows, and hand-write letters to families at Woodstock. Also on the 19th, AAMP hosts the African American Cultural Resource Forum, highlighting several organizations and institutions that engage African American art, history, and culture throughout the region.

What can we learn from Dr. King’s words when viewed through the lens of jazz improvisational music? What are the improvisational themes of justified rage, lament, hope and joy we can embrace while fighting for justice? We invite you to join international jazz composer and vocalist Ruth Naomi Floyd and guests on a musical journey of songs that surrounded the Civil Rights Movement and which reminds us of the battle for humanity, racial equality, economic liberty and empowerment.