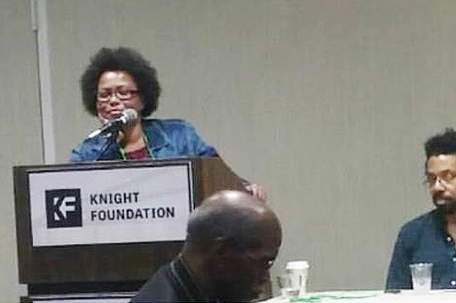 At it’s annual convention in New Orleans, the National Association of Black Journalists emphasized the importance of journalism in the Age of Trump.

On Wednesday, the National Association of Black Journalists opened up its 2017 convention in New Orleans with jazz music, Disney characters, and workshops designed to help everyone from young journalists to those whose job it is to teach them be the best they can be.

Led by the Preservation Hall Jazz Band, members were led into the conference’s opening reception to hear from a variety of speakers ranging from New Orleans Mayor Mitch Landrieu to Congressman Cedric Richmond, chair of the Congressional Black Caucus.

Now more than ever, NABJ’s mission of empowering Black journalists to tell America’s stories in general and the stories of Black America in particular is an important one, said Sarah Glover, the organization’s president.

“During this convention, we’re going to reinforce NABJ’s mission,”’she said. “We’re going to give you the tools to enact real change when you go back to your newsrooms.”

While the usual discussions of newsroom diversity and its importance were a part of the convention, the specter of being a reporter in the “Age Of Trump” was also raised. Workshops on so-called “fake news,” covering the White House and understanding the politics of covering politics were also conducted.

The SUN will have an in-depth wrap-up of the NABJ convention next week, including a conversation with April Ryan, White House correspondent for American Urban Radio Networks and NABJ’s Journalist of the Year.

The National Association of Black Journalists (NABJ) is an organization of journalists, students and media-related professionals that provides quality programs and services to and advocates on behalf of Black journalists worldwide.

Founded by 44 men and women on December 12, 1975, in Washington, D.C., NABJ is the largest organization of journalists of color in the nation.

Many of NABJ’s members also belong to one of the professional and student chapters that serve Black journalists nationwide.

NABJ is committed to the following:

NABJ holds an annual convention and career fair each summer with dozens of plenary sessions and workshops for professional development. The career fair draws hundreds of recruiters and is among the best means of finding a job in the industry. The annual Salute to Excellence awards and special recognition honors (Lifetime Achievement, Journalist of the Year, Community Service, etc.) are bestowed at each convention.

Each year, NABJ awards nearly $100,000 in scholarships and internships to college and high school students nationwide, as well as fellowships for seasoned professionals.

The NABJ Media Institute provides professional development and technical training for Black journalists at venues across the country.

NABJ is headquartered on the campus of the University of Maryland-College Park, 1100 Knight Hall, Suite 3100, College Park, Maryland 20742.

Every two years, the membership elects a president and national board of directors to govern NABJ. An executive director leads the national office staff.