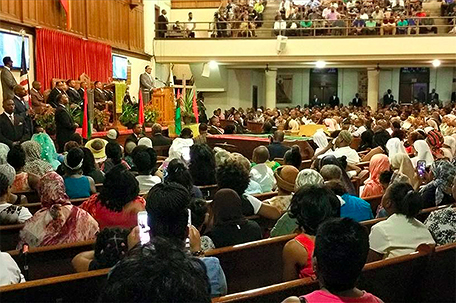 The sounds of African drums poured out onto Broad Street and greeted those waiting to hear from Nation of Islam leader Minister Louis Farrakhan Tuesday evening at the Tindley Temple United Methodist Church.

Farrakhan was in town to raise money and momentum for the Justice…Or Else march, which will be held in Washington, D.C. on Oct. 15 and will commemorate the 20th anniversary of the Million Man March.

Farrakhan gave a riveting speech that covered everything regarding the lives of Blacks in America, discussing slavery, President Barack Obama and his years in the White House, the movie Straight Outta Compton and his life prior to beoming a minister in the Nation of Islam.

Farrakhan explained the importance of knowledge of self, something that he believes  African Americans have lacked for over 400 years.

People from all over the region came to the overheated temple to see Farrakhan and hear his message. Because of how instrumental Philadelphia was when the Million Man March took place in 1995, it made sense to make the city one of his first stops.

“It was Philadelphia that was the largest contingent at the Million Man March.” Minister Farrakhan said about the faith and leadership coming from this city.  Farrakhan also told the audience that native Philadelphian Will Smith and wife Jada Pinkett Smith are donating $150,000 for the march this time around.

Farrakhan addressed the civil rights movement of the ‘60s and leaders such as Rev. Dr. Martin Luther King, Jr. and Judge Thurgood Marshall.  “Thurgood explained before he passed that in the future, the white man wouldn’t be wearing white robes, he’d be wearing black robes in the courthouse.”

He ended his rousing talk with a Justice or Else chant and simply said “Let’s go to Washington.”