Mincey & Fitzpatrick: lawyers on a mission for the community 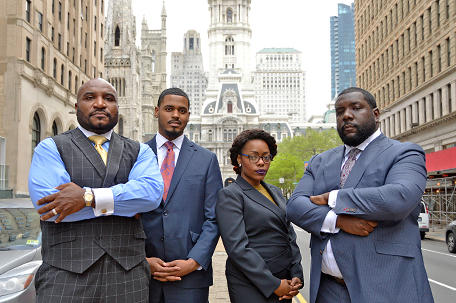 It would not be unlikely to find the lights on at Mincey & Fitzpatrick LLC as early as 6 a.m. or as late as 9 p.m., The cell phones of attorneys Kevin V. Mincey and Thomas Fitzpatrick are also always charged, should their services be required outside of business hours.

The duo readily admits that like the old-fashioned family physician, they are “on call” for those crisis moments their clients often face. And despite their well-appointed Center City office and high profile portfolio, both men insist that the primary motivating force for them is providing social justice to all of their clientele.

“When I came into law I envisioned myself helping people,” said Mincey, a New Hampshire native that has proudly claimed Philadelphia as his adopted hometown. “I remember seeing Johnny Cochran defending O. J. (Simpson), whether or not he was guilty. I just saw him in the courtroom doing his thing. I wanted to practice law, and be a good lawyer.”

Fitzpatrick, a Detroit native and Villanova University alumnus, also knew early on that he wanted to help people navigate the justice system. Even while he was in high school, Fitzpatrick had an interest in assisting others through what he calls the “adversarial process.”

Both men caught the entrepreneurial bug early. For Fitzpatrick, it was through growing up in a struggling family, where he watched relatives suffer at the mercy of the government or unfair employers. He contrasted this with the many successful African-American entrepreneurs he witnessed doing well in Detroit when he was a child..

“I knew I wanted to write my own ticket — that even if I became a trial lawyer, that I had to be my own boss,” Fitzpatrick said.

Since Mincey and Fitzpatrick are from different cities, the one thing they found baffling about Philadelphia was the presence of so many nonprofits. Both insisted that there is a time and place for this type of corporation, but they decided early on that they would be a for-profit partnership. So they bypassed that part of Philadelphia’s culture and opened a private law practice.

Yet, their practice offers some of the services you’d find at a  nonprofit law firm. For example, they perform free initial legal consultations and often create payment plans for clients who need them.

But they do clarify they are a for-profit firm. When former Congressman Chaka Fattah came to them for legal help, initially they took him on as a client; but realizing they weren’t going to be paid, they had to drop the Fattah case.

“We do some pro-bono work,” Mincey said. He points out that they have supported the Barristers many times and assisted many others “in dire straits” and needed strong civil rights attorneys. “We have helped many clients by giving about $1 million in legal aid, and that is why we received the 2014 award from the Philadelphia Bar Foundation,” Mincey said.

Fitzpatrick is quick to add that once a client is taken on, they give them their cell phone numbers, for both civil and criminal cases. “We are responsive to our clients,” Fitzpatrick said.

Yet, having a Philadelphia-based law firm has not been without its challenges. They have been told that they cannot get certain city contracts because of a conflict of them serving as defense attorneys. They have also accepted cases, for instance, where someone was a victim of police brutality—where they have had to sue the City of Philadelphia.

Mincey and Fitzpatrick readily admitted it crossed their mind to give up the defense attorney side of their practice in order to  obtain lucrative city civil contracts. Yet they always come back to the reason why they decided to practice law.

When they’re not spending mornings in courtrooms or afternoons and evenings in the office, you can find them on the golf course. Mincey says that he could be considered “a golf addict” and has some mastery of the game. Fitzpatrick, however, said he is not as ardent about golfing and his performance bears it out. 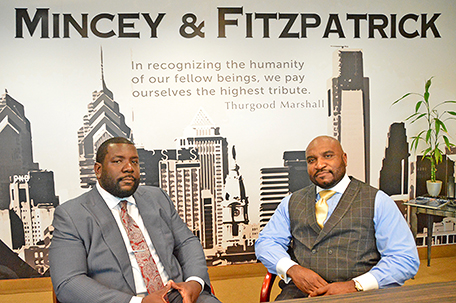 “I used to be a football player, so I usually spend my weekends working out or spending time with my 9-year-old daughter,” Fitzpatrick said.

Mincey also enjoys time with his family during his free time. Additionally, he considers himself the “godfather of softball games” when he’s not tinkering with one of his cars.

After the two are refreshed, it’s time to get back to the long hours of their legal enterprise. They both acknowledged that they have an internal motivating force that keeps them going.

Fitzpatrick says that although he does not consider himself a spiritual or religious person, he does view the law as his calling. “I do have the belief that I am meant to make a difference,” he said.

Mincey also sees the legal profession “as something that I am supposed to be doing.” He and his legal partner are looking ahead a few years to see Mincey & Fitzpatrick’s destiny in the next few years.

“We have other lawyers who work with us, but I see us getting more full-time lawyers,” Mincey said. “We also have an office in Erie. We are licensed to do some out-of-state work. We have had cases in Pennsylvania, Georgia, and New Jersey. We have provided representation in federal court in New York, Pennsylvania, and Florida. I see us growing and spreading our imprint.”

Over the years, Mincey & Fitzpatrick has grown to include domestic relations cases. They plan to continue to expand into a national practice. With the changes in the marijuana laws, the law firm sees another potential area of growth.

“We will be making medical marijuana compliance a part of our practice,” Mincey said.