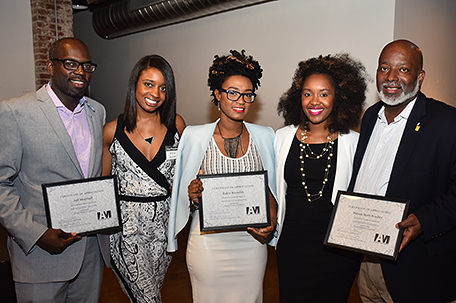 Finalists were asked a series of questions by a panel of sharks, which included African American Chamber of Commerce Board Chair, Steven S. Bradley, Rakia Reynolds, and media director, Jeff Marshall. Audience members also got to actively participate in selecting which business via Twitter, by asking questions and ultimately voting for the winning business.

In the end, the crowd voted to award iROC the $1000 grant to expand their reach.

“I’m still just numb”, said Andrea Walker after her victory. Walker is the founder of iROC. (or intelligently Redefining Our Culture), an organization she launched after losing her mother to AIDS.

Like Walker, millennials are now opting to start their own business at an extremely high rate instead of taking the traditional route of seeking employment after college. It’s a drastic change in our workforce that was fueled by the economic downturn of the early 2000s. And millennial entrepreneurs are extremely attracted to Philadelphia.

According to the Pew Charitible Trusts, since 2006, no major city has experienced a larger population growth among 20-34 year olds than Philadelphia. The city’s population of 20- to 34-year-olds increased by about 100,000 from 2006 through 2012. With such a large millennial population, organizations like Influencing Action Movement are growing in both need and impact.

Influencing Action Movement is a millennial founded and lead organization that hopes to influence individuals to take action through communicating effectively, giving back, and networking.

“We want to empower individuals to take actions that will create and build sustainable wealth in their communities, reduce violence, and develop healthier relationships”, said IAM founder, Felicia Harris.

In addition to networking events, IAM also provides volunteer opportunities, hosts political education and engagement events, and offers mentor matching programs for youth and young adults. Upcoming events for Influencing Action Movement include a fish fry fundraiser and the IAM Student Takeover Back to School event. To find out more about Influencing Action Movement and how you can get involved visit influencingaction.org