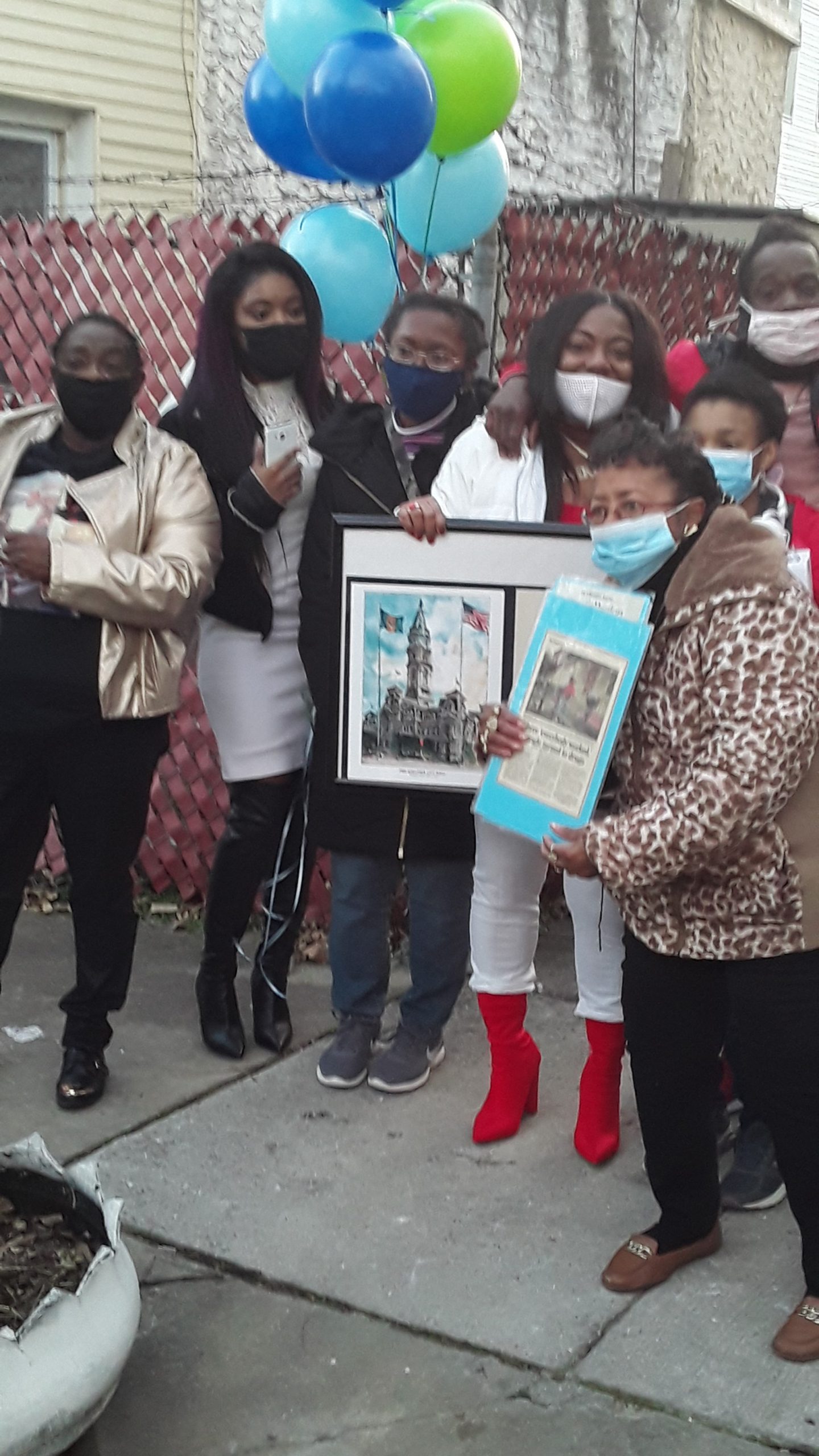 Photo above: Tameka Porter and neighbors of Lex Street with proclamation from the city and article about the tragedy.

Tameka Porter stood at the microphone with her son, Raheen, and her daughter, Shanera, on the 800 block of North Lex Street. This is the same block where her brother, George Porter was killed 20 years ago, along with six other people inside a tiny row house known as the Lex Street Massacre.
Councilmember Jamie Gauthier was on hand to help memorialize the seven victims who were killed.

“Twenty years ago today, on this day, ten people were shot execution style at this very location,” Gauthier said. “To this day, this remains the largest mass killing in our city’s history. Today, on this 2nd Annual Day of Peace, we honor our brothers and sisters we have lost. And we extend our love and support to the family members, friends and neighbors who continue to feel the impact of what happened here on this block 20 years ago today.”

“This was and still is a citywide tragedy, because on that day, we lost people that mattered,” she continued. “We lost citizens of this city. We lost valuable Black lives. And because of that, we will forever keep their memories alive in this city.”

“Because of her refusal to allow the memory of her brother [George Porter] to blow in the wind, Tameka Porter continues to push her music on YouTube and record songs about the tragedy of the Lex Street Massacre,” Gauthier concluded.

“This is my whole movement. I want to shed light on the biggest massacre in Philadelphia history,” she continued. “My brother wanted me to do my music. He always wanted me to do that. He was pushing me to do it. So, I’m doing this in honor and memory of my brother.”

Porter also said the city had messed up the case when they arrested the wrong men who didn’t have anything to do with the crime. She said once the police arrested the right men, the city tried to make everybody else forget about the Lex Street tragedy.

State Sen. Vincent Hughes, who also attended the event, agreed with Porter. He said the city tried to sweep the Lex Street Massacre under the rug and sent that message to the large crowd in attendance.

“That’s why I thank each and every one of you for coming back to Lex Street today and keeping the victims’ memory alive,” he continued. “On this block, our lives matter, Black Lives Matter and Lex Street Lives Matter.”

Described as the deadliest mass shooting in Philadelphia history, the Lex Street Massacre left seven people dead while the three other victims were badly wounded.

Fortunately, there were three survivors, who lived to tell their story.
On the night of December 28, 2000, four gunmen broke into a tiny row house at 816 North Lex Street and shot ten people execution-style; the victims laid face down on the floor.

Four men were charged with the mass murder and stood trial for the killings. They spent 20 months in prison before charges were dropped for insufficient evidence. They sued the city and eventually received a settlement for $ 1.9 million for wrongful arrest.

After Senator Hughes spoke to the Lex Street crowd, Porter released balloons in the air in memory of the seven deceased Lex Street victims. While the crowd was cheering, she had tears of joy in her eyes.

“I appreciate everybody coming out today,” Porter said. “This was really great. This was really special. This is something I will never forget. It [shows] me, people really do care.”