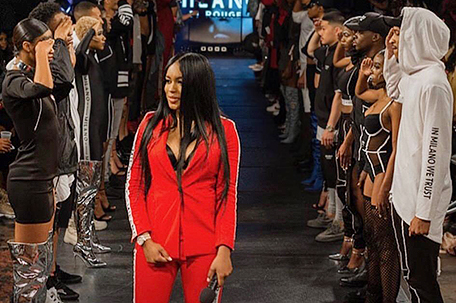 ABOVE PHOTO:  Founder/designer Milan of Milano Di Rouge walks down the runway at one of her fashion shows.

Philadelphia native Milan of Milano Di Rouge grew up with ambition, creativity and a love for fashion.

In 2012, that creativity found an outlet in the blogosphere.

Milan used her blog to talk about fashion, dating, and offered motivational advice to women, something that she later turned into the fashion line Milano Di Rouge. Since its conception, Milano Di Rouge has become a staple not only in Philadelphia, but throughout the country. With a huge online presence and social media following, the fashion line continues to grow and in 2016, Milan was selected to be a Designer in Residence at The Philadelphia Fashion Incubator (PFI) at Macy’s Center City.

Now in celebration of five years in the business and a great deal of success, Milano Di Rouge presents the “Year of The 5: Making Dreams Reality” fashion show on Sunday, April 29 at Liberty Place, 1625 Chestnut St. from 7pm-10pm.

She sat down with the SUN to talk about her journey.

The name Milano Di Rouge was inspired by the images of powerful women from the video of the 2001 remake of the LaBelle classic “Lady Marmalade,” which was set in the French nightclub, the Moulin Rouge. The apparel brand is a unique combination of luxury and streetwear that’s all it’s own.

While she’s become a success in the fashion industry, she doesn’t consider herself a designer.

“I always loved fashion, but I don’t really look at my job as fashion,” she said. “The clothing aspect of Milano Di Rouge is more the platform I use to get my voice out. I don’t look at myself as a designer… I look at myself as a businesswoman, an influencer and a creative person. The fashion is just what I love. Everything I wear is something I would buy, so I make what I would buy. It’s more about the story and that’s what I’m trying to share… the story and the journey of just being happy and living your dreams. That’s what my brand represents, making your dreams reality… that’s really what I want people to know.”

The journey to making dreams a reality is not easy. While she inspires others with her brand, it’s inspired her personal growth as well, Milan said.

“It’s been a journey for me personally as well as my business; personally, because my brand really helped shape me into a better person,” she said. “I set big standards for myself and for my brand so I could grow into being a better person with the big shoes I had to fill. Before I started my brand, I was the typical young girl getting into drama and I wanted to change. I used my brand to help me change. So this was a big milestone for me becoming a better woman. Milano’s fifth year is like my rebirth. With this fifth year there was so much going on… so many ups and downs, so many wins and losses.”

One of the losses Milan experienced was the death of her dear friend Robert Wilks, better known as Camaro Rob. The 29-year-old was senselessly gunned down in Philadelphia on November 18, 2017. Milan is dedicating her show “Year of The 5: Making Dreams Reality” to Wilks with hopes that the messages of unity and peace will resonate.

“This show is bigger than the clothes, it’s bigger than the brand… this show is about unity,” she said. “The theme is military. This is not about us, it’s about the people. I asked my team, ‘Who are our clients? Who are our customers?’ It’s the people that are in the hood, where people are at war with each other, where people are killing each other everyday. No one understands our struggle except for us, so I said we have to do something meaningful to them. The overall message is unity, overcoming self-hate and sticking together.”

In addition to the “Year of The 5: Making Dreams Reality” fashion show that offers fashion with a purpose, Milan is also using her brand to be socially responsible in other ways.

“I have a “Safe Sex Saves Lives” campaign where we promote HIV awareness,” she said. “I believe that if you protect yourself you can prevent it. People who have HIV have been so thankful for me to use my voice to put information out there. It’s hard for them to use their voices because there’s a stigma against them. I’m doing the campaign so we can educate our community because it’s not talked about… people act like it doesn’t exist! Education is priceless and the more you know, the more you understand. If I can make someone’s life better just by being in it or by having a conversation, that’s what I’m going to do. If I can change one life and prevent one person from getting HIV that’s all that matters.”

Milan and the Milano Di Rouge brand will undoubtedly continue to grow and change lives.  For more information on “Year of The 5: Making Dreams Reality”, visit: www.themakingdreamsrealitybrand.com.  You can also connect with Milano Di Rouge on her lifestyle app, which offers daily motivational quotes, dating tips, fitness tips, and an opportunity to shop the latest styles. You can follow Milan on social media at @iammilanrouge on Instagram and the business @milanodirouge.

The fashion event of the year is back: The Philadelphia Collection 2011