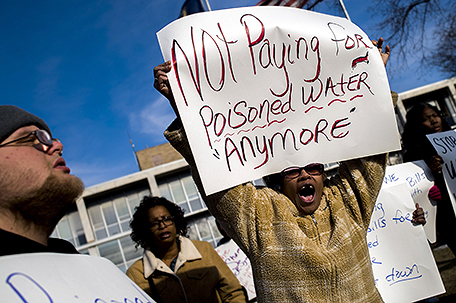 ABOVE PHOTO:  Flint resident Angela Hickmon, 56, chants during a protest outside City Hall in downtown Flint, Mich., Monday, Jan. 25, 2016. Michigan’s attorney general named a former prosecutor on Monday to spearhead an investigation into the process that left Flint’s drinking water tainted with lead, though Democrats questioned whether the special counsel would be impartial.  (Jake May/The Flint Journal-MLive.com via AP)

LANSING, Mich.  — The Michigan Legislature voted Thursday to direct another $28 million to address Flint’s water emergency, allocating money for bottled water, medical assessments and other costs in the city struggling with a lead-contaminated supply.

The funding received quick and unanimous approval just over a week after it was proposed by Gov. Rick Snyder. The bill now heads to the governor’s desk.

“We obviously have a number of issues that we have to deal with, whether it’s infrastructure, whether it’s folks having to pay for water that obviously is undrinkable,” said Senate Minority Leader Jim Ananich, D-Flint. “But the most important I think right now … is to start the focus on the assessment and the providing of services and this appropriation starts us on the path to do that.”

It is the second round of funding enacted since the crisis was confirmed in the fall.

The money will pay for developmental assessments of children age 3 and younger, additional school nurses, lead and blood testing, plumbing fixture replacements and other costs. The largest allotment – $4.6 million – is for bottled water, filters and replacement cartridges being distributed to residents in the city of nearly 100,000 people.