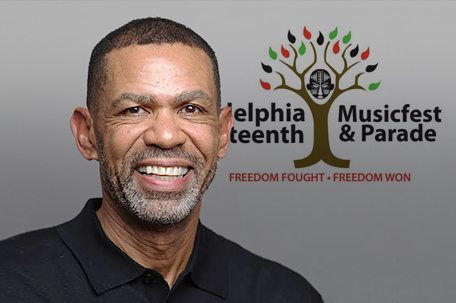 ABOVE PHOTO: Michael A. Rashid

Dating back to June 19, 1865, Juneteenth is the oldest celebration commemorating the ending of slavery in the United States. The Philadelphia Juneteenth Parade and Musicfest, produced by the Pennsylvania Juneteenth Initiative, is a huge annual celebration attended by thousands.  The event joins people together to have fun, embrace African and African American culture and history, and continue the tradition of higher education, .

Rashid is the former CEO of AmeriHealth Caritas, a national leader in Medicaid managed care and other healthcare solutions. He holds a Master of Business Administration in finance from the Harvard Business School and a Bachelor of Science in marketing from the University of Southern California. A proven and savvy business leader, Rashid brings over 30 years of executive management experience to Philadelphia Juneteenth providing the direction needed for the organization to expand its capacity.

The 2018 Juneteenth Parade, which was televised on ABC to over 60,000 viewers, drew over 1,500 participants, 20 floats and approximately 10,000 attendees. Those numbers are expected to double for 2019 as they move the 2019 parade route from downtown Philadelphia to the Historic 52nd Street in West Philadelphia in an effort to increase attendance and economically benefit community-based businesses.

On Saturday, June 22, 2019, the  Fourth Annual Juneteenth Parade and MusicFest will begin with an “Honor Our Ancestors” breakfast at the historic Belmont Mansion. The parade will then step off at 52nd and Jefferson Streets, move south on 52nd Street and end with a festival at Malcolm X Park (52nd and Pine) where the official renaming ceremony of 52nd Street to Muhammad Ali Way will take place. Local and national celebrities are expected to be present and, once again, the parade will be televised.