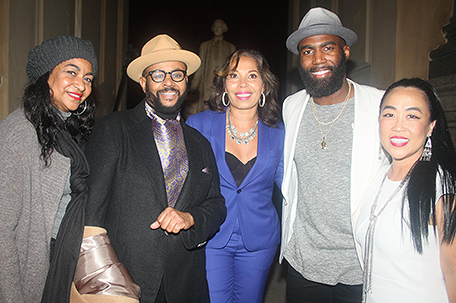 On Tuesday, November 27, MenzFit held their Third Annual “Who Wore It Best” fashion show fundraiser in Conversation Hall at City Hall. The room was transformed, complete with a runway, just in time for “Giving Tuesday” for the event. Smiles decorated the faces of attendees while they enjoyed music, a variety of light bites and a wide selection of beverages. Attendees were also encouraged to mingle, take pictures on the backdrop, and to also consider sponsoring a MenzFit client for an entire year for the reasonable price of $150.

NBC10’s Harry Hairston acted as the co-host, alongside Councilman Curtis Jones Jr. for the second year. He spoke about Rhonda Willingham, CEO and founder of MenzFit and her dedication to helping men turn their lives around. Hairston also commended the men of MenzFit and their courageous choice to start over. Jones, also shared remarks about the phenomenal work MenzFit does in the community  as he encouraged the audience to sponsor one of the gentlemen from the organization.

Willingham shared information about the origins of MenzFit with the audience. She also offered her gratitude for the partnership with Damari Savile. The MenzFit/ Damari Savile partnership makes it possible for the men to receive a week’s worth of professional clothing once they secure employment. The masterminds behind Damari Savile —  Philadelphia Eagles safety Malcolm Jenkins and his partner Jay Amin — were in attendance, alongside Jenkins’ lovely wife Morrisa.

The men of MenzFit turned into professional models right before the audience’s eyes. Five of the men donned in an array of attire that ranged from suits with brightly colored shirts and ties to suit jackets paired with turtlenecks worked the runway. Vernon Ray ended the MenzFit segment of the show wearing a black suit, burgundy bow tie and a burgundy and white decorative scarf. Ray praised the organization for their growth and consistency. 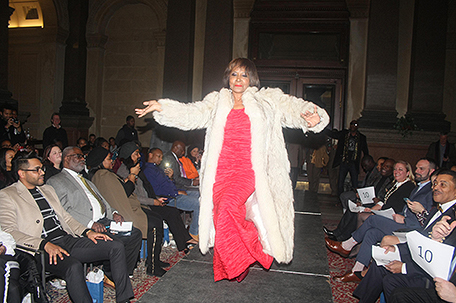 “I met Rhonda seven years ago,” Ray said. “I can honestly say that it’s amazing to see the quality of men she continues to produce from her organization. The fact that she is still able to help these guys at that capacity is amazing. It was breathtaking to participate in the show! With the amount of activity going on in the city and the amount of organizations in the city, it’s incredible to see that MenzFit can still stand strong with what they do and what they stand for.”

The next segment of the show featured fashion from K. Vaughn Scarves. The first model wore a long, blue scarf with an intricate African print. She performed an African dance before exiting the runway with a dramatic leap off of the platform. K. Vaughn Scarves also featured models wearing scarves of gold, red and black hues, sequins in bright silver, and for the finale, a two-piece, pink almost blanket length scarf, that the model removed to reveal a shawl of the same color and material underneath.

The Damari Savile portion of the show gave proof that beauty is often in the details. The four models featured in their lineup modeled suits with clean lines in blues, black, gray and tan. The gray suit jacket featured had an extra finishing touch — a colorful lining of the NYC skyline. They also showcased a women’s pantsuit, proving that pristine cuts are chic on everyone.

As the audience waited for city officials to prove “Who Wore it Best” in 2018, MenzFit client Vernon Steve shared a few words about his journey. Steve, who was jailed at the young age of 17 and spent 32 years in prison for an accidental incident, expressed his gratitude for what MenzFit gifted him.

“The outfit that I have on now comes from MenzFit,” he said. “I picked this outfit out myself, but if it wasn’t there, I couldn’t get it. The workshops and everything that MenzFit is doing… everything from sitting down talking about fatherhood to finances, I can’t minimize it in any way. At MenzFit, they don’t just put you in a suit and send you out with no guidance –  they literally mentor you and then ask you to mentor someone else.”

After the moving words of Vernon Steve, the “Who Wore It Best” portion of the show commenced. A panel of judges selected one winner for the women and one winner for the men. The city officials who pulled looks from their personal wardrobes were excited to display their fashion sense to the attendees.

Jack Drummond, director of the Mayor’s Office of Black Male Engagement, began the show cloaked in a blue and orange kente cloth shirt, while playing the violin brilliantly. The next model to hit the runway was State Representative Morgan Cephas, who serves in the 192nd Legislative District. Cephas combined urban chic attire in black, red and white with black open-toed booties and fur accents.

Reigning 2017 Men’s “Who Wore It Best” winner Councilman Curtis Jones Jr. took no prisoners as he owned the catwalk in a black suit, gold and purple ascot, tan hat, and black gloves. With Drake’s “Nice For What” playing in the background, Jones tossed his tan gloves to the audience, who erupted in laughter.

With such vastly different looks, the panel of judges had a task on their hands with selecting this year’s winners.  After a few minutes of deliberating, the results were in. With a very close score of 79, Councilwoman Blondell Reynolds Brown (Councilwoman Helen Gym received a score of 78), Brown was crowned the 2018 “Who Wore It Best” winner. Jones was victorious again and walked away the “Who Wore It Best” men’s winner for the second year in a row. The fashion portion of the show ended shortly after the winners were announced, but the smiles and fun continued well after. “Who Wore It Best” 2018 was a night to remember, and next year’s event will certainly be one you do not want to miss!

To find out more about upcoming events or to donate to MenzFit, visit www.menzfit.org.