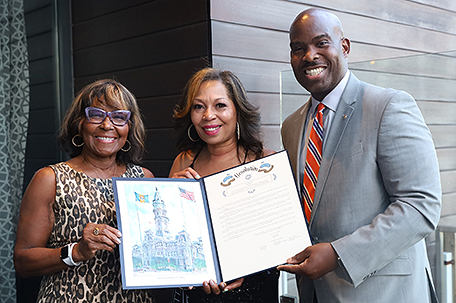 MenzFit recently celebrated its 15-year anniversary during a milestone event held at the Rivers Casino in Philadelphia.

The event — themed “Highlighting the Journey” — included a cocktail reception, informal fashion show and silent auction. It also featured a video detailing the organization’s progress from its inception to its current efforts to help low-income men — most of whom were born into poverty, are minorities, and have little formal education — secure long-term gainful employment and financial fitness.

Special recognition was given to Pennsylvania State Senator Anthony Williams (D-8th Dist.), who provided MenzFit with its initial funding to open in Philadelphia.

“Menzfit has been making an impact in the lives of disadvantaged men for 15 years,” Williams said. “By helping clients get meaningful employment, Menzfit is helping these guys unlock their confidence. They are able to achieve success for themselves, and also serve as role models for younger generations who may not understand possibilities for their own future.

This organization is helping these men look good, but more importantly feel good about themselves and their skills. I am both humbled and honored to receive the Black Tie Champion Award from an organization I admire so much.”

In a news release, the organization stated that Black and Latino men are three times less likely to receive a job interview than peers.

However, MenzFit has helped more than 1,500 men, 51% of whom remain employed.

“The men we serve gain valuable skills, but most importantly they become good providers, responsible citizens, and positive role models.”