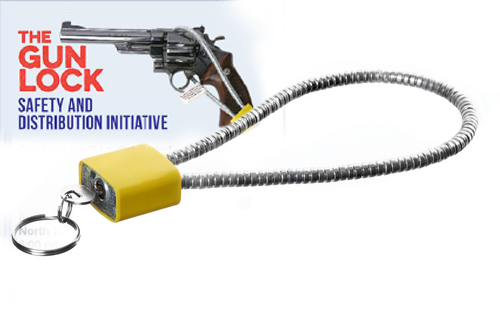 The compelling theme of “Got a gun? Get a lock” is resonating with many people who are requesting gun locks—no questions asked—from the Office of the Sheriff of Philadelphia City & County.

“It’s great that we are getting this kind of response,” said Sheriff Jewell Williams.  “The number one reason we have joined with City Council President Darrell Clarke and the District Attorney’s office is to get ANY gun in a household securely locked for safety reasons”.

Since the gun lock campaign kicked off at Temple University earlier this month, there have been several events, including a peace march in conjunction with Deliverance Evangelistic Church at 23rd & Lehigh Avenue, in which the sheriff and other elected officials literally handed out gun locks themselves.”

“It’s important that the people see leadership in a leadership role,” said Councilman Clarke recently on the “The Roundup,” the monthly radio show hosted by Sheriff Williams on WURD.

To receive a gun lock, you can either pick one up at the front desk of the sheriff’s office on the 5th Floor of 100 S. Broad street between 8:30 AM and 4:30 PM, or call our hotline number at 215-686-3572.  Leave your name, number and address and someone from the sheriff’s office will quickly be in touch with you.

“We transport more than 500 people per day back and forth between the courts and the prisons,” said Sheriff Williams, “and many are charged with crimes involving guns.  Before anger gets to a point of reaching for a gun, if that gun is in a lock, it provides at least a few seconds for an individual to change their mind about firing that weapon, and makes it almost impossible to fire if found, and handled by a child. Got a gun—get a lock”.

A bill was recently enacted by City Council entitled the “Responsibility to Avoid Possession and Discharge of Firearms by Children” act (introduced by Council President Clarke) that requires all firearms in homes with children under the age of 18 to be kept unloaded and stored in a locked container, with the ammunition in a separate locked container. The exception would be when the firearm or ammunition is in the “immediate control” of a person with a license to carry a gun.